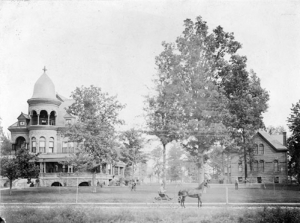 The mansion was built by industrialist and entrepreneur Monroe Seiberling, who came to Kokomo during the Indiana gas boom of the late 19th century and built several large factories in the region. Seiberling became wealthy from his investments and decided to build a home befitting his wealth and position in the community. Construction on the mansion began in 1889 under the supervision of architect Arthur LaBelle of Marion.

The home was finished in 1891, but the family only stayed a few years. Subsequent owners included Orange Darby, whose dry goods store was located in the building now occupied by Cook McDoogal’s Irish Pub; Reverend William Parr, the namesake of Parr Methodist Church, whose successful investments led to considerable wealth; and Franklin Miller, a prominent real estate developer and community leader. In 1914, Miller sold the mansion to George Kingston, a wealthy inventor and entrepreneur who developed the carburetor used in Henry Ford’s Model T. Kingston passed away in 1946 and Indiana University purchased the mansion from his estate, using it as the Kokomo branch of IU until 1964.

After IUK moved to its new campus, the mansion sat empty for nearly seven years. In the early 1970s, Howard County officials were looking for a way to move the county museum out of the courthouse and claim the space for the growing needs of county government. They reached a long-term agreement with IU that turned control of the property over to the county for use as a museum. The mansion has since regained its Victorian elegance and is now a centerpiece of community pride, visited each year by thousands of people from across the country and around the world.

The architecture of the house is a mixture of Neo-Jacobean (Queen Anne) and Romanesque Revival styles. Built at the height of the gas boom in Indiana, the house was originally heated and illuminated by natural gas. It includes eight rooms on the first floor, seven on the second, and a grand ballroom on the third floor with an entrance to the rotunda outside. The grand porch overlooks the grounds. The ornate interior woodwork and parquetry uses a variety of native woods, including walnut, oak, maple, cherry, mahogany and butternut. Moorish themes are featured in brass door knobs, plates, hinges, and sash lifts.

Since 1972, the Seiberling Mansion has been listed on the National Register of Historic Places by the U.S. Department of Interior.

Images of Seiberling Mansion through the years

Seiberling Carriage house in its original form
The Kingston Home
West side view from 1891
The parlor as it is today/
The dining room as it is today, with the original keyhole window featuring Kokomo Opalescent Glass
The walnut bedroom, Kate's room, on second floor
✖