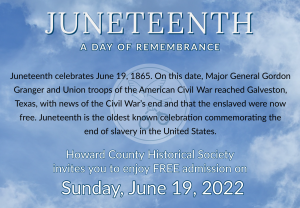 Howard County Historical Society (HCHS) will celebrate Juneteenth, recognized as a federal holiday observing the end of slavery, with free entry to the museum on Sunday, June 19 from 1 to 4 p.m. This offers a great opportunity to see the exhibition Howard County African American History Revealed, located on the second and third floors. Visitors are encouraged to share a story about the Carver Neighborhood in the Story Kiosk on the second floor.
The day's name is a combination of "June" and "nineteenth", commemorating the anniversary date of the June 19, 1865 announcement by Union Army Major General Gordon Granger, proclaiming freedom from slavery in Texas. It is also known as African American Freedom Day or Emancipation Day. While President Abraham Lincoln's Emancipation Proclamation had officially outlawed slavery in Texas and the other states in rebellion against the Union almost two and a half years earlier, there was little enforcement of the proclamation without troops. Texas was the most remote of the slave states with few Union troops, so enforcement there had been slow and inconsistent before Granger's announcement. It is on this date that slavery finally ended across all states and territories.
Generous sponsors for the day are Dave Dubois, REALTOR, The Wyman Group and the Second Missionary Baptist Church.
✖