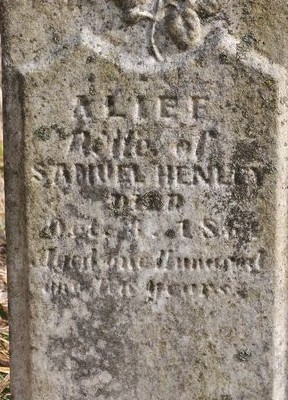 On Nov. 2, 1801, in Randolph County, North Carolina, Edward Fentress presented a manumission petition to the court on behalf of his brother George requesting that one Aliff Henley and her child Case be liberated from the shackles of slavery.

On Nov. 11, 1844, the very same Mrs. Aliff Henley, 500 miles and 43 years from bondage, was first in line that day at the land office in Delphi, Indiana, where she paid $280 “in full” for 80 acres of farmland in northwestern Howard County, Indiana.

An improbable, yet amazing, journey, for a remarkable woman who Indiana State Archive records show is the first African American to buy land here. Furthermore, research through the Howard County Historical Society, the Kokomo Early History Learning Center, and the Genealogy and Local History department at the Kokomo-Howard County Public Library (KHCPL) has revealed powerful and inspiring details about this matriarch of Howard County.

Though we don’t know precisely when she left North Carolina, she and her family were in Indiana sometime around 1835. Marriage records show Mrs. Henley’s daughter, Lucinda, married the Rev. David Rush in Rush County in 1837. The family ultimately was part of a group of African Americans who migrated from Marion County north to the new Richardville (Howard) County. Also in the group were the pioneers Lewis Clark and John Hardiman. They bought land and began farming around 1844-45 in what would eventually be Ervin and Clay townships, and this cluster of families became the Rush Colored Settlement, some six miles northwest of the county seat of Kokomo.

A brief published history says the settlement was named for the Rev. Rush, who led the church there. Archival accounts say the Rush and the later Bassett Colored settlements each had a school and they shared a Baptist church. Rush also served over the Methodist church and a cemetery. There we find “Alief Henley,” whose striking gravestone contains the following inscription: Wife of Samuel Henley. Died Oct. 3, 1861. Aged One Hundred and Ten Years.

Mysteries remain in Mrs. Henley’s story. An apparent marriage to Samuel is undocumented beyond her tombstone. Also, Alief spelled with an “e” has confused researchers for at least 150 years. Archivists attempting to sync the name with other records then and now apparently couldn’t decide if it was a man or a woman. The name Alif Henly appears twice in an early county history book, though amazingly not with the descriptions of “Colored” people, churches or schools. First reference is among a list of early settlers, all white men, and Alif Henly. It’s impressive that the name was recalled and recorded (with the white guys, no less!). That someone at least remembered her suggests she was notable in meaningful ways.

Like other Indiana pioneers, they came to buy land and help build a community. As the small settlement grew, the Rev. Rush and Case Henley (the same son liberated with his mother in 1801) are two of the individuals entrusted on an 1851 deed to ensure three-quarters of an acre of land in Ervin Township would be used to “Erect or cause to be Built thereon a house or place of Worship,” which would be the first African Methodist Episcopal Church – and precursor to today’s Wayman Chapel A.M.E. The grantor of land was Mrs. Henley, making the start of the A.M.E. church part of her legacy to Howard County.
She was a woman liberated from slavery in Virginia and North Carolina, who couldn’t read or write, who bought and paid for 80 acres of land with cash money on Nov. 11, 1844 -- the earliest date we’ve found of an African American in Howard County, Indiana. But how old was she then? A more plausible interpretation of slave records and census schedules presumes her birth to be around 1765, making her closer to 95 or 96 when she died. Mrs. Aliff Henley’s life is a tribute to the enduring human spirit and perseverance spanning an epoch of American history.

What better symbol to her memory than the decoration on her tombstone -- a rose in full bloom.