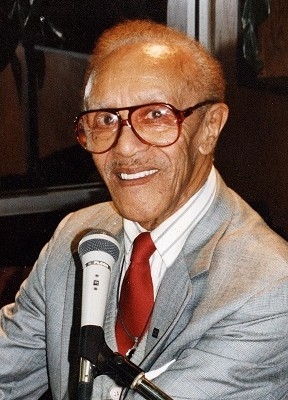 He was a true renaissance man.

His accomplishments were extraordinary. He performed with the biggest names in popular music, and a dozen or so of his own band’s recordings from the 1940s are searchable online. His name appears in notable mid-20th-century jazz anthologies. Closer to home in a second career phase, he supported his community as a local labor leader, while still performing at venues ranging from Kokomo dinner clubs to Indiana Pacers home games in Indianapolis. Family members say he “moved mountains.” Yet this Kokomo native who played high school basketball and later played guitar at the famed and fabled Apollo Theatre in New York City, never lost his sense of humility.

He got down on his knees and prayed. Every night of his life.

Orval Chester Hardimon, later known professionally and affectionately as “Baggie,” was born in Kokomo on May 25, 1913, the son of Pearl and Carrie Hardimon. He started playing music in high school as a drummer, then switched to guitar. The first appearance of his name as a performer is as an instrumentalist in a 1937 musical program at Wayman Chapel A.M.E. Church (he was a lifelong member). Switching to the secular scene in the late 1930s, “Baggie Hardimon and his swingsters” had gigs at the Izaak Walton Club and the D. & D. Tavern on East Markland Avenue.

By 1940 he was performing in Indianapolis and the February 1941 obituary for his grandfather indicated he had moved to Buffalo, New York. He had made it to the East Coast, and the big time.

Accomplished and dignified, he was an electrifying entertainer who mingled easily with other musicians and dazzled sophisticated East Coast audiences. During the 1940s and ‘50s, various incarnations of his jazz band recorded at least 15 tracks that were issued by several record labels at the time. The group backed everyone from Louis Armstrong to Ella Fitzgerald. Hardimon performed with Pearl Bailey and Billie Holliday. He jammed with orchestral jazz leader Stan Kenton, and studied with Jimmy Smith, who revolutionized the use of the Hammond B-3 organ as a jazz and soul instrument.

Hardimon continued that tradition. For years after leaving the East Coast for the gentler rhythms of Indiana, he taught guitar and organ to area youth and continued to perform locally almost to the end of his life. Jet Magazine ran a picture of him in 1971 accepting an award for the longest engagement at the Grissom Air Force Base Officers’ Club. He regularly accompanied local singers at area venues, and even judged a beauty contest or two. He took a job as a janitor at the General Motors Corporation’s Delco plant in Kokomo, ultimately rising to the role of civil rights chairperson for the area union local. He knew people and knew what was important, and was always available to help a fellow union member, and never too busy to call on an elderly shut-in.

A fascinating recent addition to his story was found in records relating to a remarkable family history. Research shows Hardimon is a direct descendant of John Hardiman from Virginia, born around 1792. Ancestor John is listed in the 1840 census schedules in Indiana, and a few years later he and a group of other African Americans from Marion County headed north. Their land purchases in Ervin and Clay townships from 1844 to 1847 place them among the original African American pioneers in Howard County, with John Hardiman among the area’s early farmers.
Descendant Orval Chester died on March 31, 1999, at the age of 85 (his wife Marian had preceded him in death). His zest for people, his love of family and friends, and a sense of purpose in the way he applied his extraordinary talent throughout a long and eventful life ensures a lasting legacy for the man named Baggie Hardimon.