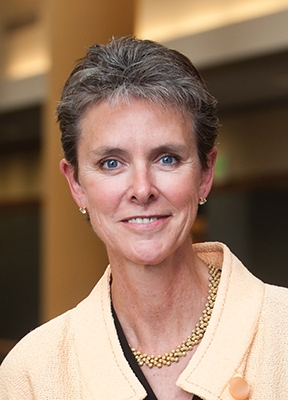 Beth Brooke was first known in Howard County as an all-around athlete for Taylor High School’s Class of 1977. She excelled in tennis, golf, softball, and basketball and was part of the first group of women to receive basketball scholarships from Purdue University. On the surface, that gave few hints to her future accomplishments, although it does help explain her 2015 selection for the Indiana Basketball Hall of Fame and her 2017 Theodore Roosevelt Award from the NCAA.

Beth graduated with highest distinction from Purdue and earning an undergraduate degree in industrial management and computer science. In 1981, she joined EY, formerly Ernst and Young, in Indianapolis as a CPA, and became National Director of Tax Advisory Services in 1991. She took a two-year break from EY to join the U.S. Department of Treasury in 1993, where she was responsible for tax policy related to insurance for the Clinton Administration. Upon returning to EY, she rose to the position of Global Vice Chair of Public Policy, working on policies related to global capital markets, and served as the head of EY’s diversity and inclusiveness efforts.


Beth has been named to the Forbes list of the “World’s 100 Most Powerful Women” ten times. She served on the US Delegation to 53rd and 54th UN Commission on the Status of Women. She has co-chaired the International Council on Women’s Business Leadership, serves on the board of the Aspen Institute and The Conference Board, and has honorary doctorate degrees from IU, Purdue, and Babson College. In 2017, she was honored with the Krannert Business Leadership Award by Purdue. This year, she also became a member of the board of directors of the United States Olympic and Paralympic Committee.