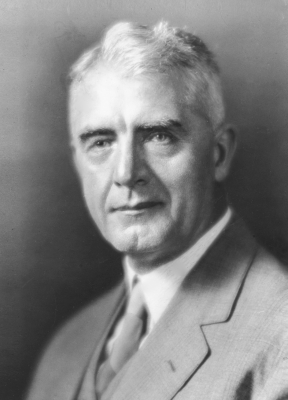 One of the most recognizable names in Howard County history is that of C.V. Haworth, a historian, teacher, school administrator, and community leader. Haworth High School was named in honor of his 33 years as superintendent of the Kokomo schools and 50 years in education.

Clarence Victor Haworth was born in his Quaker family’s home on a farm near New London in 1875. His parents had moved into that area just a few years after Howard County was established. His father and mother both taught school, as did a sister and brother. His education started at the one-room “Frog Pond School” near New London. Following his graduation from New London High School, he settled on teaching as a career and enrolled in the Kokomo Normal School. At that time, all it took to be licensed as an elementary school teacher was six-weeks of summer classes and an exam, which Haworth easily completed before being assigned to the Porcupine School in Monroe Township. In 1903, he was hired as principal of the Columbian School in Kokomo, leaving there in 1907 to teach history om Danville and then Anderson. In 1909, he returned to Howard County as principal of Kokomo High School, and was promoted to Superintendent in 1913.

Haworth received his MA from Indiana University in 1921, and an honorary degree of doctor of laws in 1974. He was one of the founders, and served as board president, of the Kokomo Junior College, which evolved into Indiana University Kokomo.  He is the author of the books Howard County in the World War and Indiana Government, as well as numerous articles for The Indiana Teacher and other periodicals. He was president of the IHSAA in 1913 and 1915 when the state high school basketball tournament was initiated. He served on the YMCA board for many years, was one of the founders of the historical society in 1916, held leadership positions in the Rotary Club and the Kokomo Chamber of Commerce, and served on the executive council of the IU Alumni Association. In 1931, the City of Kokomo honored him as its Most Distinguished Citizen.