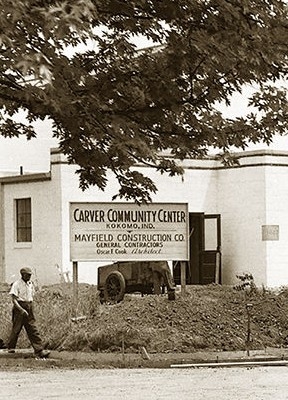 
For well over 70 years, Carver Community Center has been an integral part of the Kokomo community, promoting wellness for the body, mind, and spirit, but its founding in 1947 to provide a recreational facility for African American youth was a long time coming.

The need for such a center grew in a time of institutional segregation in Kokomo. As principal of Kokomo’s Douglass School, the Rev. Henry A. Perry Sr. recognized the need for a recreation center for the city’s Black young people and began working toward its creation in 1929. Douglass had opened in 1920 to serve as the city’s elementary school for African Americans; its students were not allowed to use the pools, gyms, and facilities that young white people took for granted.

It took a March 1940 visit to Douglass School by First Lady Eleanor Roosevelt to create the needed momentum and eight years later, in June 1948, Carver Community Center was opened to all the people of Kokomo. Perry had suggested naming it in honor of the eminent Black scientist and inventor Dr. George Washington Carver, Perry’s mentor when he was a student at the Tuskegee Institute.

Carver Center still emulates its original vision of community and organizational collaboration to benefit students of all ethnic backgrounds, and it has continued to evolve to meet changing needs. Today’s programs include basketball, mentoring, tutoring, drama, art, games, boxing, drug and abuse prevention, and a myriad of after-school activities.

Carver Community Center leaders and volunteers take pride in the fact that their programs not only support the area’s youth, but their entire families. Events at the center bring generations together in a fun and social environment designed to nurture the best qualities of each individual. The center has also become a major location for pickleball. Almost every square inch of the basketball courts now bears the lines and portable nets for the game that is all the rage for local senior citizens.

Donta Rogers, the current director of the center, is a perfect example of how “Carver” has spanned generations. People who came to the center as kids now bring their kids. In a 2018 newspaper interview, Rogers explained, “[Growing up] I got to come and experience actually playing with other kids in the community,” he said. “I was here every day – we have this game room, and I thought our game room was just the best thing ever. It had pool, ping pong, board games … and then we had the basketball court. Especially if it was bad outside, we had some place to go that was inside.” Of course, for decades, Carver Community Center has been most well-known for its tradition of basketball. Youth and adults of all ages travel from miles around to watch and participate in Carver’s camps, clubs, and teams. Carver’s basketball programs range from kindergarten and up through adults, offering this most Hoosier of sports to boys and girls, men and women. In August 2017, the 70th anniversary of the Carver Community Center was celebrated for an entire weekend with a homecoming, dinner, and worship service. More than 350 people attended the recognition dinner that Saturday, including 25 family members of Rev. Perry, the center’s founder. It was a clear demonstration of how many lives have been positively impacted by the center over the years. As with all organizations, money is never in great enough supply to meet the needs for building upkeep and improvement along with programming costs. Support has come through donations and grants from the City of Kokomo, the Community Foundation of Howard County, Center Township, and the United Way, along with many generous individuals. In recent years, Community Development Block Grant funding by the City of Kokomo has gone to a variety of improvements, including replacing roofs, windows, downspouts and gutters and cleaning and tuckpointing the bricks. Carver is here to stay, with plans to continue to grow and serve the community.
“We want to do more things for kindergarten and up, so that would mean more tutoring, more after-school programs, nutrition programs – where we can teach kids more about how to eat, how to prepare food and how to set up a table, more reading programs so kids can be ready to go back to school, and more activities for kids like field trips,” Rogers said.

Paraphrasing a story in the Kokomo Tribune, more than 70 years after its founding, Carver Community Center serves as a pillar of the community. For some, it has been a home away from home. For others, it was the happening place to be after school. But for all, it has been a safe place to gather, be active, and socialize in Kokomo. An apt description of a facility and program that has nurtured hundreds of people over several generations.