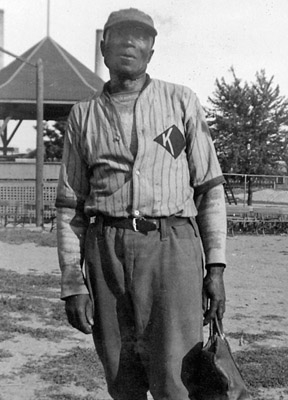 “Spring is here. It’s official now” was the annual announcement in Kokomo newspapers in the 1930s, ’40s and ’50s. “Circus John” Byers was once again organizing local baseball teams to compete in area amateur and semi-pro leagues. With winter in the past, he could be seen canvassing store owners in the business district, raising money for equipment and uniforms.

Byers – who once was described by the Kokomo Tribune as “one of the most legendary individuals ever to live in Kokomo” -- was born in Tennessee probably around 1870. He came to Kokomo in 1919 and again, for good, in the mid-1920s (circus work had brought him to Peru, hence the nickname).

Farmhand, steamboat sailor, railroad "Road Man," Wild West Show performer, journeyman ball player -- at a time when people rarely saw much beyond their hometowns, Byers spent most of his early life on the road.


For several decades after settling in Howard County, he organized, managed, and often played for a number of local teams, including the well-known Kokomo Specials and the eponymous “Circus” Giants in the 1920s and ‘30s. Byers had prowess at every position. He once pitched a no-hitter; in another game, his home runs fueled a 19-6 blowout. But his legend came from the league play (ages 9 to 21) and informal baseball clinics he offered for boys at Foster Park to keep them busy during the summer months. He became known as the father of youth baseball in Kokomo. Stern but devoted, he set strict ground rules for “his kids” – no smoking, no profanity, be on time, play fair. Still, many who played for him later remembered that he taught the kids to “have fun,” and as someone who brought a lot of joy to children of Kokomo for many years.
Even late in life, Kokomo’s “Mr. Baseball” continued to make a difference, including serving as an advisor for a girls’ volleyball and soccer league. He died in 1960 and was buried in Crown Point Cemetery … reportedly in his baseball uniform.