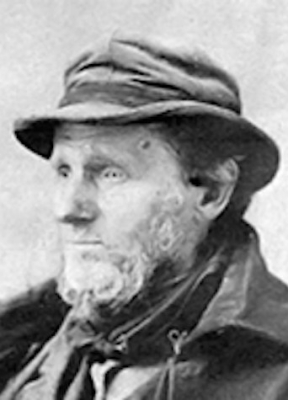 David Foster's name is legendary in Howard County, but our picture of the real man has been blurred by time and tall tales. One story says he traded a wagonload of “liquid corn” to a Miami chieftain for a thousand acres of bottomland. Another says he used a jug of moonshine to encourage the county commissioners to choose his location for the county seat. Facts don’t support the stories, but the truth is still remarkable.
Foster was born to a family of Virginia Quakers. He trained as a cabinet maker, but found his vocation as a trader. He bought 600 acres of swampy, bug-infested land which had originally been deeded to a Miami chief. On that land, he became a leader in the establishment of the new county, its government, and its social life.
In 1844, Foster was the county’s first merchant and largest landowner. He lobbied for the establishment of the county seat, agreeing to donate 40 acres near his home on Wildcat Creek. Within the next year, the new county’s first court was convened and first sermon preached in his home. The sermon led directly to the establishment of Grace Methodist Church, which was built on land donated by Foster. He also gave land for the Normal School and the county’s first railroadne, and was a founding member of the county’s first bank.
In their lifetimes, David and Elizabeth Foster saw the wetlands drained and turned to agriculture. The county grew from a handful of pioneers to more than 12,000 citizens, and Kokomo went from 2 to 4,000. They saw the first log courthouse give way to a beautiful Victorian structure. The first newspaper was established, the Masonic Lodge was chartered (with Foster as a member), and Kokomo High School graduated its first class. The railroad came and the Vermont Covered Bridge was built. And they watched as Howard County sent its sons, one of them Foster’s own, off to fight in the Civil War. The county is built on a foundation they laid.
David and Elizabeth are passing though eternity in Crown Point Cemetery, not far from the Wildcat Creek they loved.
✖