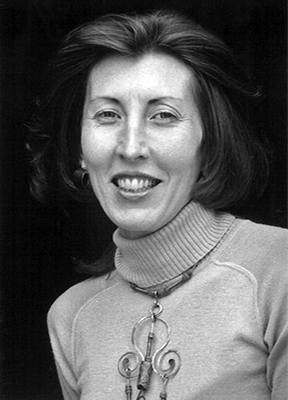 Dolores Hahn-Rollins, born in Kokomo in 1940, created a legacy of service to her home state, her country, and the world that included mentoring, empowering, and changing the lives of countless women.

The only child of Gilbert and Louise Hahn, she left for Indianapolis after high school, earning a nursing degree and working in the emergency room at Methodist Hospital. A young doctor’s wife in the 1960s, she met the bishop of the Episcopal Diocese of Indianapolis, who encouraged her to become involved in the leadership of church. That encouragement launched her on a new path where she would eventually impact people across the globe.

That legacy of service began in Indianapolis where she co-founded the Julian Center, one of the first women’s counselling centers in the city. Since its founding in 1975, the Julian Center has helped more than 66,000 survivors of domestic and sexual violence.

Hahn-Rollins earned a bachelor’s degree in psychology from St. Mary of the Woods in 1979. In 1980, she moved to Washington, D.C., where she completed her master’s degree in public administration/women’s studies at George Washington University and launched a career in international service. From 1984 to 1988, she worked at the U.S. State Department as an internal consultant for the Foreign Service Institute. From 1984 to 1989, Hahn-Rollins helped design and deliver a “Women’s Leadership Project” for the National Episcopal Church in Kenya, a program whose story is told in a documentary film entitled “The Women Will,” which premiered at the Kennedy Center in 1986. Starting in 1988 as a senior consultant with Training Resources Group Inc, she delivered training and organizational development assistance to public and private sector clients that included the U.S. Agency for International Development (USAID); the United Nations Development Programme (UNDP); the World Bank; and Heifer International.