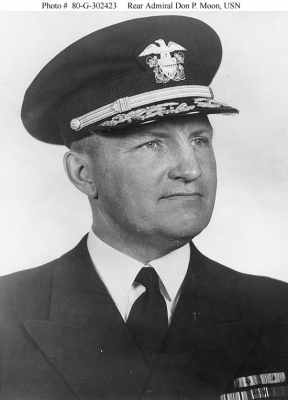 Don Pardee Moon was born in Kokomo, Indiana, on April 18, 1894. He was the son of Barnabas C. Moon, a prominent Kokomo attorney who was mayor of the city of Kokomo from 1922-1923.
After graduating from the U.S. Naval Academy in 1916, Moon was assigned to the battleship USS Arizona, where he developed several instruments to improve gunnery.
By 1934 he was the commanding officer of the Asiatic fleet destroyer, John D. Ford.
He became a captain in 1941 and took part in the invasion of North Africa, being promoted to rear admiral in 1944. As a rear admiral of the U.S. Navy, he directed the landings on Utah Beach from Bayfield during the D-Day invasion of Normandy, on June 6, 1944.
Moon died on August 5, 1944, from battle fatigue and was buried at Arlington National Cemetery. A biography, entitled My dear moon by Jonathan P. Alter, was published in 2005. Moon was also depicted by Sierra Leone on a 2004 postage stamp, marking the 60th anniversary of D-Day.
Don Pardee Moon was married to the late Sibyl Hall Moon, and together they had four children - Meredith Whittier Moon, Don Pardee Moon Jr., David Peaslee Moon and Peter Clayton Moon.
In his book Keppy’s War, Captain John Kepchar states, “Moon was a handsome man and well built… He had, in fact, been an Olympic swimmer and wrestler while at the Naval Academy. He definitely had that athletic look about him, with a military bearing that was tempered with kind eyes and strong facial expressions. We liked him instantly… Admiral Moon made us feel good about ourselves and the role we would play in the war.”
✖