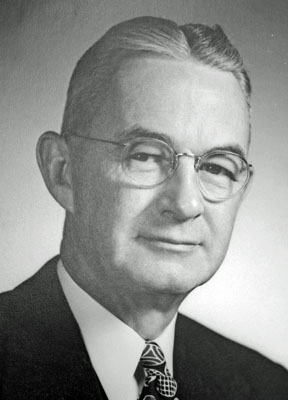 Donald B. Smith Sr. was a post-war banking pioneer in Howard County, founding banks in both Kokomo and Russiaville in the post World War II era and played a large role in the rebuilding of Russiaville following its worst disaster — the 1965 Palm Sunday tornado.

Though he was the only son of a Mishawaka banker, at first Smith rebelled against the idea of becoming a banker himself; later, both his son and grandson would follow him into the business. Smith went to Purdue University where he played football (at 5’10 and 150 pounds) and studied engineering. There he met and married his wife, Elizabeth. He enlisted in the military in 1918, then returned to Mishawaka and began his banking career.


Smith began as a teller, working his way up to the position of cashier, which was considered an executive position at the time. He became executive vice president at First National Bank of Mishawaka. He found himself in Kokomo from time to time as he traveled slowly down the dusty ruts of then-U.S. 31 between northeastern Indiana and Indianapolis. He made a habit of stopping in Kokomo for a break during the arduous trip and soon became familiar with the city.

All seven of Kokomo’s banks had failed during the Great Depression. In 1946, Kokomo had just one bank when Smith and a group of local business leaders founded First National Bank. Smith brought years of banking experience to Kokomo when he moved from Mishawaka in 1946. He became the bank’s first president and served in that capacity until his retirement in 1967. He continued to serve as chairman of the board of directors until the bank leadership changed in a hostile takeover in the early 1970s.

In 1947, Smith helped found Russiaville State Bank, serving as its first president and board chairman. The Russiaville bank later became Central Bank and more recently was purchased by First Farmers Bank and Trust. After the Palm Sunday tornado destroyed much of Russiaville and areas of Kokomo in 1965, Smith organized efforts and resources to rebuild Kokomo and Russiaville and made sure businesses and residents had access to their finances.

In addition to leading local banks, Smith served as treasurer of the Kokomo Community Chest, which became the United Way of Howard County. He actively served the chamber of commerce, YMCA, YWCA and multiple other local and state organizatons. He held offices several times in the Indiana State Banking Association and in 1934 was the FHA liaison officer for Indiana banks. He contributed numerous articles to banking magazines regarding investments and banking operations.

Smith’s nomination for the Hall of Legends called him “a true community leader and organizer who helped Kokomo and Howard County grow. A man who took pride in assisting rural communities (like Russiaville) to maintain its identity and support its local residents.”

Smith passed away in 1972 and is buried at St. Joseph Cemetery in South Bend.