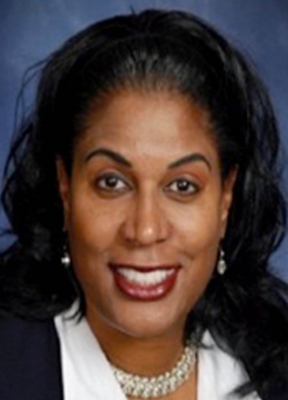 Dr. Judi Brown Clarke is the Diversity Director for the National Science Foundation’s BEACON Center at Michigan State University, but in 1984 she was Judi Brown, Haworth High School student and athlete.
Born in Milwaukee, Judi grew up in Howard County before her father’s job with GM took the family to Michigan. When she enrolled at Michigan State University, the Big Ten had yet to recognize female athletics and opportunities for women were limited. Track and Field was her only option and it proved to be a turning point. Judi became a five-time national champion and a 3-time All-American, and still owns an unbroken world record as a member of the distance medley relay team. She won three gold medals in the Pan Am Games and a silver medal in the 1984 Los Angeles Olympics. She was Big Ten Female Athlete of the Year, and the Michigan State Female Athlete of the Decade. In 1987, Judi was one the Sports Illustrated “Sportswoman of the Year” and was featured in the magazine as one of eight American “Athletes Who Care” due to her work with underprivileged children.
Judy was head coach of the MSU women’s track team in the early 1990’s, got a Master’s Degree in Education there before earning a Doctoral Degree in Public Policy and Administration from Western Michigan University. After finishing the PhD, she spent 4 years as the Director of the Office of Multicultural Affairs at MSU. She completed fellowships with the National Children’s Defense Fund, National Center for Infants, Toddlers, and their Families, and the Michigan Education Policy Fellowship Program. She is active in local politics as a member of the Lansing city council.
Dr. Clarke’s status as a Howard County Legend doesn’t rest on her athletic achievements so much as her work to provide opportunities for underprivileged children and young adults. Her former coach is quoted in the Detroit Free Press as calling her “the only athlete I ever coached who had an Olympic medal and a doctorate degree. That qualifies her to be the perfect role model.”
✖