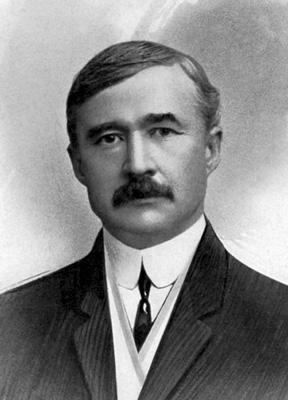 Born in 1857, Elwood Haynes graduated in 1881. He moved to Howard County from Portland to work in the newly-discovered natural gas fields and was considered the state's leading expert on natural gas during the Indiana Gas Boom. He started the Haynes Automobile Co. in Kokomo, working alongside Elmer and Edgar Apperson. The trio invented the first American automobile – called the Pioneer – on Oct. 23, 1893. The Haynes-Apperson Co. was formed in 1896, which they operated together until 1902. In 1905, the Haynes-Apperson Co. became the Haynes Automobile Co., and Haynes continued to make cars until the Depression. In 1924, the company went bankrupt and closed upon Haynes’ death in 1925. It was through his efforts and inventions the auto industry has had such an impact on the economic growth of Kokomo.

Haynes also had a lasting impact in the field of metallurgy. His creation of a cobalt-chromium allow called Stellite and a company to manufacture it played a key role in two world wars, the space race and the first man on the moon, among other things. The company he started is still in operation in Kokomo as Haynes International and the trademarked Stellite alloys are still produced by Kennametal Stellite.
✖