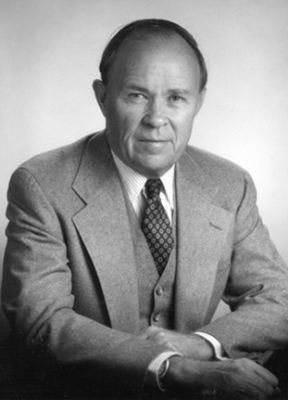 Elwood Hillis was born in Kokomo, Indiana, on March 6, 1926. He attended Kokomo Schools and graduated from Culver Military Academy in 1944. After earning his law degree from Indiana University, he was admitted to the Indiana bar in 1952 and commenced practice in Kokomo, practicing here for 18 years.
Bud served in the U.S. Army in the European Theater with the rank of first lieutenant from 1944-1946. In 1954 he retired from the Reserves with the rank of captain in the infantry.
Hillis served in the Indiana General Assemblies as a member of the House of Representatives from 1966 through 1970. He served as a delegate to the Indiana State Republican conventions from 1962-1970.
Elwood Hillis served Kokomo and Indiana’s 5th District for 16 years as a member of the U.S. House of Representatives, after being elected to his first term in 1970. He was involved in the development of the M1 (or Abrams) Tank and was instrumental in the government’s bailout of the Chrysler Corporation in 1979. Bud was the first republican that the Indiana AFL-CIO ever endorsed for Congress. After 8 terms, which he had won by an average of 44,000 votes, he retired from Congress in 1987.
On March 17, 2010, Hillis was honored for his years in public service at the Howard County Lincoln Day Dinner, held at the Kokomo Country Club. Hillis is the brother of renowned choral director Margaret Hillis and the grandson and namesake of inventor and automobile pioneer Elwood Haynes.
He currently resides in Windsor, Colorado, with his wife, Carol, and spends his summers in Culver, Indiana. Together they had three sons - Jeff, Gary and the late Brad Hillis. They have three grandchildren and four great-grandchildren.
✖