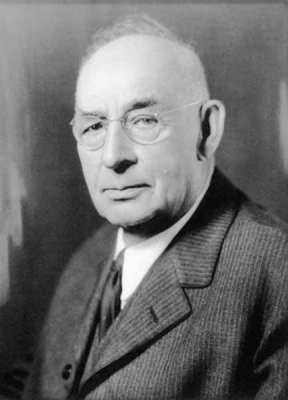 George Kingston came to Kokomo in 1901 to work in the Ford and Donnelly Factory as a pattern maker. He brought with him from Michigan the natural mechanical abilities and inventive nature that made him a Kokomo icon.
During his time at the Ford and Donnelly foundry, he tinkered with a new design for a carburetor. In 1903, he left the foundry to produce carburetors for his friend Henry Ford’s Model T. When production outgrew his small shop, he joined three other men to start the Byrne-Kingston company, which eventually merged with Kokomo Brass and Kokomo Electric to become Kingston Products. The success of the carburetor led to other designs and products, including spark plugs and coils and a line of toys. The race cars, fire trucks and roller skates manufactured under the name of Kokomo Toys are highly prized today by collectors. During World War II, Kingston shifted to war production, building high explosive shells and parts for military vehicles. The company earned production awards from the Army and Navy in 1942, 1943 and 1944. Kingston Products operated in Kokomo until 1989.
His factories and designs made Kingston a wealthy man, so much so that he was able to purchase the Seiberling Mansion as his residence in 1914. His family lived in the Seiberling until 1931, and his son and daughter were born there. According to his daughter, the murals on the second floor were commissioned by George and represent his interests in fishing, Michigan, and Florida. After his death in 1946, the family sold the property to Indiana University.
✖