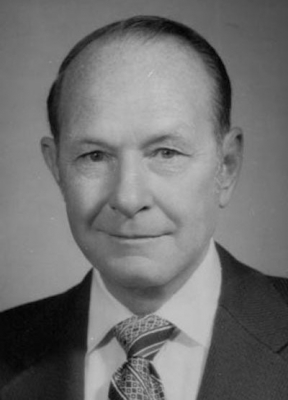 Dr. Harold Ritchey was widely regarded as the “father of solid-propellant rocketry.”
Born on a farm in Ervin Township, Indiana, on October 5, 1912, he earned his bachelor’s and master’s degrees, as well as a doctorate in physical chemistry in 1938, from Purdue University.
Ritchey served in the U.S. Navy from 1941 to 1946 and taught chemistry, chemical engineering, and the mechanics and thermodynamics of jet propulsion at the U.S. Naval Post Graduate School.
He also was chief of the nuclear reactor engineering department at the General Electric Co. Hanford Works in Richland, Washington.
In 1954 he received the C.N. Hickman Award of the American Rocket Society for outstanding contributions to the field of solid-propellant rocketry, specifically for developments that removed size limitations of the rockets.
He lived with his family in Ogden, Utah, from 1960-1966, when they moved to Pennsylvania, where Ritchey worked at Thiokol Chemical Company headquarters. He guided Thiokol’s rocket programs from the development of the first large, solid-propellant rocket that was successfully flight tested in 1953, all the way to the space shuttle solid rocket motor design effort. He was chairman of the board at Thiokol for 28 years, retiring in 1977.
Dr. Harold Ritchey passed away in 2001 in Ogden, Utah. He and his late wife Helen had two sons - Dave Ritchey from Bozeman, Montana, and Steve Ritchey from Bradenton, Florida.
✖