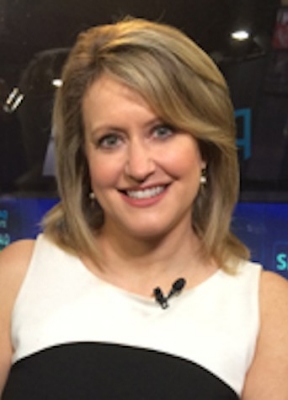 She grew up as Jane Kingseed on her family’s farm near Greentown, but today she’s seen daily as Jane King on television stations across America.
Jane graduated from Eastern High School in 1986 and was Miss Howard County Fair 1987. In 1991, she received a degree in Communications from Purdue University. Her television career began at WLFI-TV in Lafayette as an anchor and reporter, while also working part-time as an adjunct professor of broadcast journalism at Purdue. The family agribusiness experience left her with a unique viewpoint and an abiding interest in the markets, especially commodities, so it was natural for her to begin to specialize in business and financial reporting. After leaving WLGI, she went on to cover consumer issues at WPVI-TV in Philadelphia, and the stock market for both CNN and Bloomberg Television. In January 2014, Jane started her own company with a business partner, LilaMax Media LLC, where she provides financial news content from the NASDAQ in Times Square for more than 50 local television stations around the country including WISH in Indianapolis, KGO in San Francisco, KING in Seattle. During her career, Jane has covered the dot com bust, the 2005 Republican National Convention in New York, the Economic Summit of the Americas, the 2008/2009 financial crisis and provided live reports for CNN and local TV stations from the World Trade Center attacks on September 11th, 2001.
While most of her reporting has been done from the New York Stock Exchange, and she presently works from the NASDAQ, Jane has also been a floor trader and member at the Chicago Board of Trade.
Jane lives in Manhattan with her husband, fellow Purdue grad Gene Schafer and her two children, Max and Lila, who love to visit Howard County and the farm in Greentown and are quickly becoming Boilermaker fans.
✖