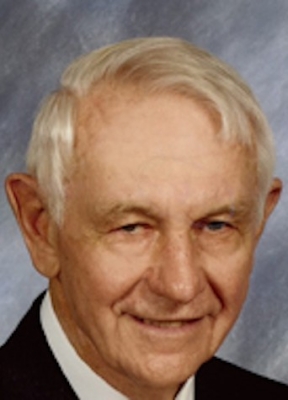 John was a native Texan, who found his true home in central Indiana. He served in the Army as a paratrooper and interpreter during World War II, and was wounded during the Normandy invasion. After receiving a medical discharge, he returned to the States to resume his life. His first step was to enroll in the chemical engineering program at Purdue University. During his time as a Boilermaker, John was active in Beta Sigma Psi. His involvement with the fraternity was the start of a life of active volunteerism, and led to a stint as national President of the fraternity. The biggest highlight of his time in West Lafayette was his introduction to Hilda Miller of Kokomo. John and Hilda were married in 1949.
Hilda brought John home to Kokomo in 1950, and he accepted the job of treasurer for Miller Transportation Corp. In the early 60’s, Miller Transportation was sold to the Bradford family and was renamed Brada-Miller. At that time John went into business for himself, starting the modular residential construction company, Durable Homes, Inc. He also spent time in the remaining family business, Miller Beverage, Inc.
John’s community involvement was extensive, but one of his favorite organizations was Boy Scouts. He was a Scout as a young man, and often told the story that he never reached Eagle Scout because he couldn’t swim well enough. In Kokomo, he resumed his life in Scouting, serving as a scoutmaster, regional director and district president and working on several national and international jamborees. He also embodied the Scout ideal of service in other ways, serving as President of the Purdue Alumni Association, the Purdue Research Foundation, the United Way of Howard County, and the Kokomo Howard County Chamber of Commerce. He was chairman of the Kokomo Development Corporation, a member of the Kokomo Aviation Commission and the Ivy Tech Region 5 Board of Trustees, and served on the boards of First National Bank and Saint Joseph Hospital.
Hingst generously shared his financial success, as well. His legacy includes charitable endowment funds with the Community Foundation, Purdue University and the Sagamore Council of the Boy Scouts.
✖