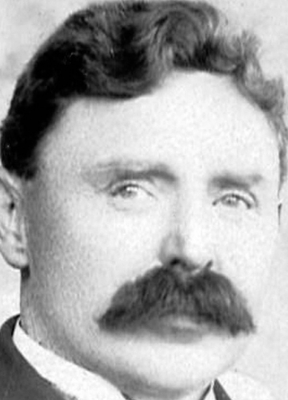 Jonathan Dixon Maxwell was their contemporary and co-worker, but his name tends to be lost in the glare of fame surrounding Elwood Haynes and the Apperson brothers.
Maxwell grew up near Russiaville and came of age during the early years of the Indiana gas boom. He trained as a machinist at Star Machine Works in Kokomo, working there and at the Apperson Brother’s Riverside Machine Shop. When Elwood Haynes approached the Appersons for help in building his first car, they asked Maxwell to help with the machine work. That choice was a historic turning point.
Maxwell helped build several of the early Haynes Apperson vehicles, but left shortly after the company was officially organized. He landed at the Olds Motor Works and helped build and test some of their early cars. In 1904, after a year of development, Maxwell went into business with Ben Briscoe to build a new runabout of Jonathan’s design, starting the Maxwell-Briscoe Motor Company. By 1909, Maxwell-Briscoe was the 3rd largest carmaker in the country, Maxwell had 19 patents to his name, and the company was building a new factory in New Castle, Indiana. Growth took a toll, though. The company led a merger that created the United States Motor Company, and within a few short years USMC went into receivership. Jonathan left the company in 1913 and the business he built was reorganized under the leadership of Walter Chrysler.
During his lifetime, Maxwell had a role in the creation of the country’s first commercially-produced auto (the Haynes-Apperson), the design and building of the Oldsmobile, the design and creation of the Maxwell autos, and, ultimately, the birth of Chrysler Corporation. Jonathan Maxwell spent the last few years of his life raising pure-bred cattle in Maryland and is buried in Peru, his wife’s home town.
✖