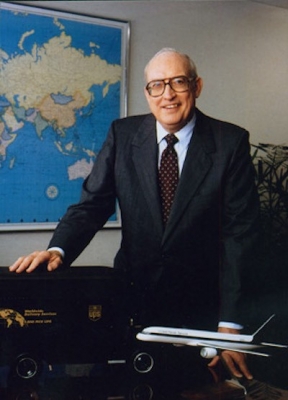 The way the entire world ships packages was greatly influenced by one of Kokomo’s Hall of Famers. A native of Kokomo, Kent C. Nelson served as the chairman and CEO of the United Parcel Service from November 1989 to December 1996 and served on the company’s board until stepping down in 2002 after 43 years of service. During his tenure at UPS, he made major investments to broaden the company’s global position and leadership role in logistics services.
Among Kent’s many accomplishments was his investment in information technology, which provided UPS with instant global communications regarding shipping activities. A dedicated advocate for public education, Nelson also served six years as chairman of the board of the Kentucky Partnership for School Reform, chaired the Atlanta Chamber of Commerce Education Committee and served as a member of the National Business Roundtable Policy and Education Reform Commission.
A 1959 graduate of Ball State University, he continues to generously support the university. Kent resides in Atlanta, Georgia, with his wife, Ann.
✖