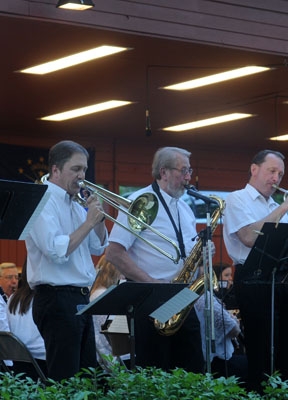 Music has long been a part of life in America. It is almost impossible not to find pictures of crowds of people surrounding gazebos in town squares throughout our Nation. In almost every one of those gazebos was a band.

The Kokomo Park Band, known by many names, has its roots in this American tradition. Its first band leader, Byron Reed held the baton during the Civil War era. During the Depression, the band played for baseball games, gave benefit concerts for charities and hospitals in nearby towns and participated in the Indianapolis 500 Mile Race activities, along with a regular Sunday afternoon and Wednesday evening concerts in Kokomo parks and on the Courthouse Square. The Park Band has entertained the people of north-central Indiana for more than a century, making it one of our most enduring organizations.

Various venues in Kokomo were tried as performance locations over the years, but by 1962 the traditional evening for the park concert had become Wednesday in Highland Park as it is today. The Kokomo band has grown from an average of 25 musicians in the 1930's to 45. Since its reorganization as a not-for-profit corporation in 1988, the band has been known as "The Kokomo Park Band" in recognition of its function in the Kokomo community.

The Kokomo Park Band is dedicated to enriching the cultural life of the community by providing performances of broad appeal and high artistic quality, creating musical opportunities for local youth, engaging the talents of area musicians, and preserving the great heritage of American band music in North Central Indiana. The band is comprised of over 130 musicians who live within a 90 mile radius of Kokomo, with 45 performing in each concert. The band currently provides a series of free concerts to the public during the summer months and performs an additional concert in February.

Serving as a cultural icon for our community for over a century, The Kokomo Park Band charges no admission and is committed to providing performances that entertain the public and encourage our young children to become involved in music.