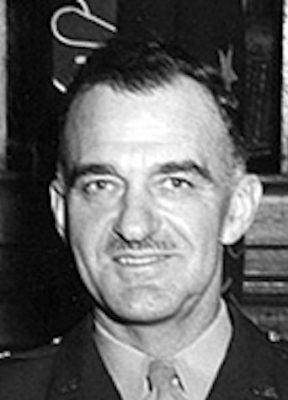 William Kepner fought in two world wars - as an infantryman and a pilot of balloons, fighter planes, and bombers. His remarkable career started inauspiciously when he ran away from home (and Kokomo High School) to join the Marines. Back home when WWI began, he enlisted in the Army, and was seriously injured while fighting in France. After Armistice, he transferred to the Air Corps and became one of the world’s most accomplished pilots of lighter-than-air craft.
In 1934, Kepner was named commander of a National Geographic–Army Air Corps effort to reach the stratosphere by balloon. He and two co-pilots had surpassed 60,000 feet when their balloon ruptured. Kepner gave the order to bail out after falling to 6000 feet, then stood on top of the gondola as the others exited. The second man out got caught in the hatch, so Kepner climbed down the rigging and kicked him loose. Kepner himself then jumped - just 500 feet from disaster. His heroism was later immortalized on the cover of National Geographic Magazine. In spite of the crash, the expedition returned with valuable scientific data and the highest altitude photos of Earth at the time.
When the Army abandoned balloons and dirigibles, Kepner moved on to airplanes. During WWII, he led the 8th Fighter Command, organizing air support for bombers over Europe and providing ground-attack support for D-Day. He personally flew ten missions in the P-51 Mustang. Later, as commander of the 8th Bomb Division, he piloted 14 bombing raids over Germany. In 1945, he was promoted to commander of the 8th Air Force.
After the war, Kepner was given command of the Atomic Energy Division of the Air Force. As such, he led operations for the 1947 a-bomb tests over Bikini Atoll. He also became the first General officer to fly a jet aircraft in the experimental X-59. During the Cold War, he was selected to lead the US Alaska Command. In announcing the appointment, TIME magazine called him a “soldier’s soldier” and an “airman’s airman.”
Kepner’s unmatched, and possibly unmatchable, military career ended when he retired from the Alaska command in 1952.
✖