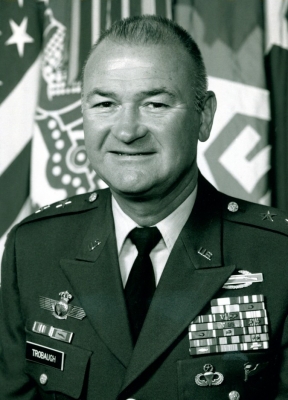 Major General Edward L. Trobaugh (US Army-Retired) is a 1950 graduate of Kokomo High School. He attended the US Military Academy at West Point, receiving his commission as Second Lieutenant in the Infantry and a Bachelor of Science Degree in 1955. He also holds a Master’s Degree in Public Administration from the University of Oklahoma. His military education includes the Basic and Advanced Infantry Officer's Courses at Ft. Benning, the Army Command and General Staff College at Ft. Leavenworth, and the Army War College at Carlisle Barracks.
General Trobaugh held a wide variety of command and staff assignments during his Army career, culminating in the post of Deputy Commanding General of the Fifth US Army at Ft. Sam Houston. His other key assignments as a General Officer included Assistant Division Commander of the 9th Infantry at Ft. Lewis, Assistant Commandant of the Army Infantry Center at Ft. Benning, Chief of the Joint US Military Assistance Advisory Group in Madrid, Spain, and Commanding General of the 82nd Airborne Division at Ft. Bragg.
He served a tour in Korea as a Company Commander and two tours in Vietnam - with the First Infantry Division (1967-1968) and the First Cavalry Division (1970-1971). He commanded the 2nd Brigade of the 25th Infantry Schofield Barracks, HI, and during his last command, the 82nd Airborne, he led the 1983 invasion of Grenada.
General Trobaugh's decorations include the Army Distinguished Service Medal (1st Oak Leaf Cluster), Silver Star, Defense Superior Service Medal, Legion of Merit (1st Oak Leaf cluster), Purple Heart,(1st Oak Leaf Cluster), and Bronze Star (with V Device) and Air Medal with (V Device).
Trobaugh retired in 1987. He and his wife, Pam, who is also a Kokomo native, reside in Washington State. They have three married children and five grandchildren.
✖