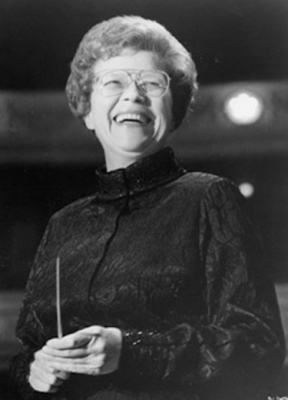 Margaret Hillis was born in Kokomo, Indiana, in 1921. She began to study the piano at the age of five and continued with several other instruments, including woodwinds, brass and double bass. She made her debut, while a student, as assistant conductor of her high school orchestra. Margaret received a bachelor’s of music degree in composition from Indiana University in 1947.
After suspending her studies during World War II, she used her private pilot’s license to serve as a flight instructor at Shockley Field in Muncie, Indiana. In 1950 Hillis founded the Tanglewood Alumni Chorus, which later performed as the New York Concert Choir and Orchestra. During her years in New York she taught choral conducting at the Juilliard School and Union Theological Seminary.
Margaret made musical history as the founder of the Chicago Symphony Chorus in 1967. Women weren’t considered seriously as conductors when she conducted the Chicago Symphony and Chorus performance of “Mahler’s Symphony No. 8” in a concert at New York’s Carnegie Hall. Her performance was outstanding enough that Ladies Home Journal honored her as its “Woman of the Year” in 1978.
That same year she earned her first Grammy Award with the RCA release of Verdi’s “Requiem.” She and the Chicago Chorus won 7 other Grammy’s over the next 16 years. Hillis was the founder and music director of the American Choral Foundation. Now Chorus America, it is an organization that seeks to raise the standards of choral performance. In 1992 Hillis conducted the Interlochen Arts Academy Orchestra and Choir as part of the Mozart Bicentennial Celebration in the Alice Tully Hall in Lincoln Center, New York.
Hillis is the sister of Elwood Hillis and the granddaughter of the inventor and automobile pioneer, Elwood Haynes. She passed away in 1998. A significant collection of her personal and professional life is currently being processed by her contemporary, James Yarbrough, at the Rosenthal Archives in Chicago.
✖