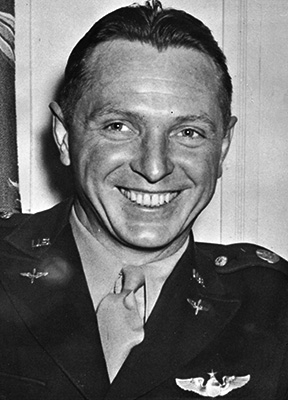 Born in 1906 in Rossville, Illinois, Mike Murphy came to Indiana with his parents as a boy and was taught to fly by aviation pioneer and mentor, Captain L. I. Aretz. He quickly became an aerobatic flyer, devising many new feats for spectators. Flying a WWI vintage biplane in the 1920’s, when barnstorming was all the rage, he was known as “The Flying Irishman” as he performed at state fairs and air shows. The first pilot to take off and land from a moving automobile, he also mounted wheels on the top of his plane so he could land upside down.

The two-time winner of the World Aerobatics Championship and three-time winner of the Lund trophy for precision aerobatics, also operated the Kokomo, Indiana airfield. Murphy joined the Army reserves in 1938 and by spring of 1943, he was putting gliders through their paces at Stout Field, Indianapolis, for the First Troop Carrier Command. He instructed at Laurinburg-Maxton glider school in North Carolina and overseas in England. Recognized as an expert in glider operations and flight, he performed a demonstration for General Hap Arnold on August 3, 1943 known as the “pea patch show”. His pilots silently landed 10 fully loaded gliders in the dark. When Murphy brought up the lights, the large group of spectators were stunned they were standing only feet from the gliders’ landing spots. This demonstration convinced General Arnold of the tactical and stealth value of the troop transport glider.

Not surprisingly, Lt Colonel Murphy was the first man of the D-Day invasion forces to land his glider, “The Fighting Falcon”, on enemy soil in Normandy. Returning home after the war with the Legion of Merit, Bronze Star and Purple Heart, Murphy continued flying and was the founder of the Marathon Oil Company’s aviation division. The founder of many Aerobatic and Race Pilot’s Associations he lived his post-war years in Lima, Ohio passing on April 11, 1981 and is buried in Lebanon, Indiana.
✖