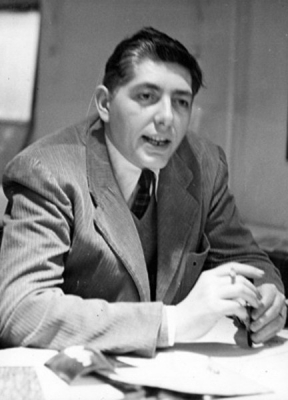 Internationally acclaimed wood engraving artist Harris “Misch” Kohn was born in Kokomo on March 26, 1916, to Russian emigrant parents. He studied printmaking with Francis Chapin and Max Kahn at the John Herron Art Institute in Indianapolis and was convinced that prints could be as beautiful and elegant as paintings.
Being the first to take book-sized illustrations of wood engravings to a larger scale, he expressed, through his work, his concern with the social and political climate of the times. Misch was the first to take the art of printmaking and move it away from a private, hand-held experience toward a public scale. With his work, the viewer would have a strong reaction to the visual impact of the piece on the wall. His work changed the way we think about prints today.
Misch was very productive until his death in 2003, and his works have been exhibited at the Art Institute of Chicago, Los Angeles County Museum of Art and Whitney Museum of American Art. His works are included in the permanent collections of the Museum of Modern Art, Metropolitan Museum of Art, National Gallery of Art, Victoria Museum in Melbourne and Bezalel National Museum in Jerusalem, among others.
Devoted to his art, family and students, Misch was a modest, kind man with enormous talent and generosity. He was married to Lore and they had two daughters, Tamara and Jessica.
✖