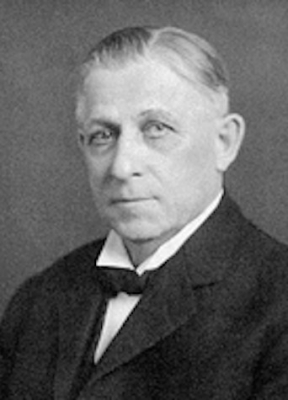 Monroe Seiberling’s time in Howard County was short, but his impact on central Indiana was significant and lasting. He led the establishment of large-scale manufacturing in central Indiana, and created a new industrial economy for the region.
Seiberling was born in Ohio in 1839 and spent his first 25 years on the family farm. He sold his interest in the family business to his brother and bought into the lumber business in Canton. From there, he went on to purchase an interest in the Akron Strawboard Company, helped incorporate the Akron Twine and Cordage Company, and was part of an investment group that bought the Upper Sandusky Strawboard plant. It was about that time when a huge reserve of natural gas was discovered under east central Indiana and Hoosier business leaders began promoting their energy resource by offering free gas to those who would locate their factories in Indiana. Seiberling was one of the first to accept such an offer and, with his group of investors, chose Howard County to establish the Kokomo Strawboard Company in 1887 and Diamond Plate Glass Company in 1889. His business expanded rapidly, with a second Diamond Plate factory in Elwood, a strawboard factory in Noblesville, the Hartford City Window Glass Company, the Montpelier Sheet and Tin Plate Company, and Indiana Rubber and Insulated Wire Company in Jonesboro. He also did some prospecting for oil in Wells and Huntington counties, and was instrumental in establishing the boom town of Gas City. The gas fields weren’t infinite, and when they began to deplete, Seiberling moved on to Peoria, where he built the Peoria Rubber and Manufacturing Company, the Prospect Heights Street Railway, and the Seiberling Plate Glass Company in nearby Ottawa. In Peoria, he even played a role in the early auto industry, working with the Duryea Brothers on some of their earliest vehicles.
The Seiberling legacy also includes the remarkable Seiberling Mansion on West Sycamore Street in Kokomo, which remains as an icon of the great gas boom and is home to the Howard County Museum.
✖