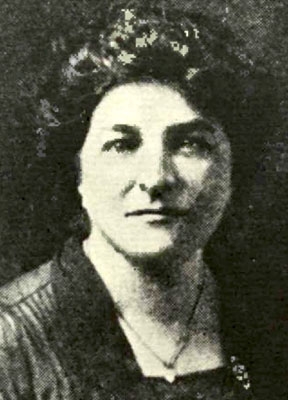 The first female US Marine

Opha May Jacob was born in Kokomo on May 4, 1878. She would wait almost 40 years to make her permanent mark in history. Little is known of her childhood, but her desire to serve was evident, since she started a career in Civil Service at the Interstate Commerce Commission shortly after graduating from secretarial school in 1895.

Moving to Washington D.C., she met and married the musical director of the Lafayette Square Opera House, Victor Johnson, in 1898. They would spend many decades together but children would not be a part of their lives. On August 13, 1918, Opha May Johnson made a fateful decision. WWI had been going on for over four years and America was fully involved. Early that morning, Opha was first in line at the Washington D.C. Marine Reserve recruiting station and by fate or providence was the first women to join the United States Marine Corps Women’s Reserve. Other women joined the ranks that day, but she was the first. She, and hundreds like her, paved the way for women in the military. Today the Marine Corps is proud to have more than 12,000 enlisted women and 1,300 female officers in their ranks.

Not quite 90 days after her enlistment, the war ended and the Marine Corps started the steady disenrollment of women, including Sergeant Opha May Johnson. Her contributions to the history of the Marine Corps were short but significant. On February 28, 1919, Opha returned to Civil Service as a clerk in the War Department.

Since Opha left the service there have been other milestones achieved by her sisters in arms. Captain Anne Lentz, first female commissioned officer in 1943; Master Gunnery Sergeant Geraldine Moran, first female Marine promoted to the top enlisted rank in 1960; Brigadier General Margaret Brewer, first female Marine general in 1978; and Lieutenant General Carol Mutter, not only the first woman to obtain the three-star rank in the Marine Corps, but also the first woman to hold a three-star rank in the U.S. Armed Forces, achieving that rank in 1996.

Opha May Johnson died on August 11, 1955 at the Mount Alto Veterans Hospital in Washington, D.C. Her services were delayed two days until August 13, 1955, which was 37 years to the day from when she answered the call to become a U.S. Marine.