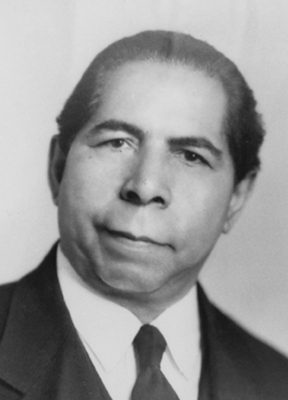 Reverend Henry Perry dedicated much of his life to the young people of Kokomo and Howard County. His leadership helped the community begin to bridge the gap between black and white during a time of institutional segregation.
Perry was born in Alabama in 1887. Before moving to Kokomo, he had lived in Washington, Chicago, Des Moines, Evansville and Terre Haute. He attended Tuskegee Institute for a time, where he became friends with one of the teachers, George Washington Carver. He earned a divinity degree from the Gammon Seminary in Atlanta, his teaching degree from the Indiana State Teacher’s College and his Master’s Degree from Ball State University.
Perry was the pastor of Wayman Chapel AME Church for four years and principal of Douglas Elementary School for twenty. As early as 1929, he was publicly proposing the development of recreational opportunities and sites for black children in the community, who were denied entrance to the pools, gyms and facilities that young white people took for granted. The proposal took years to gain support and funding. Perry himself credited the final successful campaign to a visit from Eleanor Roosevelt in March of 1940. He convinced Mrs. Roosevelt to visit Douglas School, which put the school on the front page of the newspaper for several days. He then called together the teachers at the school and told them, “Douglas School is in the limelight. It’s all right to be popular, but let us use our popularity to get the Negro youth of Kokomo an adequate place for recreations.” Perry proposed that the new organization and facility be named after his mentor, George Washington Carver.
World War II slowed progress, but only temporarily. When the country turned its attention back home again, Perry was able to cobble together a $60,000 nest egg from various sources. His dream became a reality in June of 1948 – and to this day remains a significant part of life in the community for people of all racial, social and economic backgrounds.
Perry eventually left Kokomo to become pastor of the Allen Chapel AME Church in Anderson. He passed away there in 1967 and is buried at Crown Hill in Indianapolis.
✖