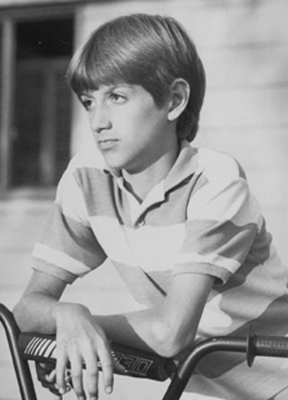 The path of Ryan White’s life took a sharp turn just days after his birth in 1971 at St. Joseph Hospital in Kokomo. He was diagnosed with hemophilia and began a lifelong series of regular blood treatments to manage the clotting disorder. In 1984, while being treated for pneumonia, he was discovered to have AIDS, a result of blood factors that had been contaminated with HIV. Little was known of the virus, its transmission or treatment, at the time.
Ryan and his family were thrust onto the public stage with little preparation, no experience, and no particular desire for the spotlight. After his initial illness subsided, the controversy surrounding his return to public schools created a firestorm of publicity and made Ryan both a symbol and spokesperson for victims of HIV and AIDS. He appeared in fundraising and educational campaigns as well as benefit programs for children with AIDS. He was befriended by Elton John, Michael Jackson, Phil Donahue, President Ronald Reagan, Surgeon General Dr. C. Everett Koop, and Bobby Knight among others, appeared on national television programs and testified before the President’s Commission on the HIV Epidemic in 1988.
Although he didn’t ask to be a public figure and maintained repeatedly that he’d trade it in a second for a cure, Ryan became one of a few people who changed the public understanding of HIV and AIDS. His death in 1990 was followed by the establishment of the Ryan White Foundation (founded by his mother, Jeannie White Ginder), the Ryan White Infectious Disease Clinic at Riley Hospital for Children, the Elton John AIDS Foundation, and The Ryan White Comprehensive AIDS Resources Emergency [CARE] Act passed by the US Congress. His life is now memorialized in an exhibit at the Children’s Museum of Indianapolis, and the stories of his time in Howard County have been preserved in an award-winning oral history collection at the Howard County Historical Society.
✖