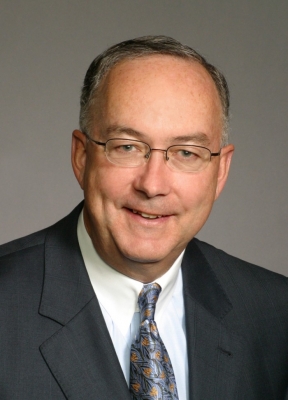 Sam Allen arrived in Kokomo after his father’s retirement from military service at Grissom Air Force Base. Sam graduated from Northwestern High School in 1971, and studied engineering and business at Purdue University. During his youth, he worked for three years as a caddie at the Kokomo Country Club. An avid and accomplished golfer, he played for the high school team at Northwestern, and earned a golf scholarship from Purdue.
Since February 2010, Sam has been Chairman and Chief Executive Officer of Deere & Company, the world’s leading manufacturer of farm and forestry machinery. The company employs over 50,000 people, operates in 35 countries, and has been included in the Fortune magazine list of the 50 most admired companies in the world.
Allen joined John Deere in 1975 after graduating from Purdue. He worked in positions of increasing responsibility in the Consumer Products, Worldwide Construction & Forestry, and Worldwide Agriculture divisions, as well as John Deere Power Systems, and managed operations in Latin America, China & East Asia, and Australia. He has served as a senior officer of the company since 2001, with additional responsibilities in human resources, industrial relations, and John Deere Credit's global operations.
Since January 2010, Allen has chaired the nonprofit Council on Competitiveness, working with other members of the council to develop a national manufacturing strategy. He was appointed to Whirlpool Corporation’s board of directors in June 2010. His love for golf continues, and he was able to combine that with his business acumen as a member of the Executive Board of the PGA Tour’s John Deere Classic for several years.
Sam and his wife, Marsha, have two children and reside in Bettendorf, Iowa.
✖