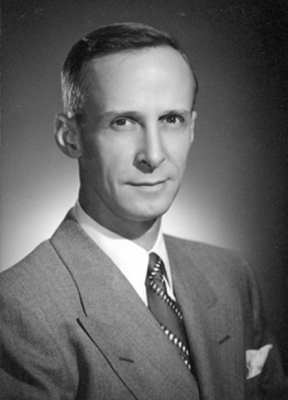 Frederick Sidney Badger is a historic linchpin in the 100-year-old company we know today as “Haynes International”. From the 1930’s through the 1950’s, his fingerprints could be found on most of the company’s major events and decisions.
Badger was an MIT-trained metallurgist who came to Kokomo in 1936 to work in the Stellite Division of Union Carbide. He was appointed Technical Director in 1939 and Vice President of Research and Development in 1944.
Shortly before World War II, Stellite was asked by the US Army Air Force to build turbocharger “buckets” for military aircraft. Badger and his staff developed an investment casting process for their durable high-temperature alloys, and eventually produced over 25 million units for WWII and the Korean War.
By the time the market for military parts dried up, Badger had recognized the importance of the casting process to the company’s future. His R&D used it to generate enough cash flow for the company’s growth into the global wrought-product manufacturer it is today.
Starting in 1946, a new manufacturing facility for wrought products was built under Badger’s leadership. Much of the original equipment is still in use today. Badger’s call for high-volume alloys to feed the facility led to the development of HASTELLOY® X, Haynes’ most important product. It is nearly impossible to fly on an airplane today that does not contain this alloy.
Badger’s career culminated in the 1950’s with the consolidation of all applied nickel-base, cobalt-base and refractory alloy research into a newly built Technology Laboratory under his direction in Kokomo. Taking early retirement, he left for California in 1959 to pursue a second career at the Rocketdyne Division of North American Aviation. He remained in California until his death in 1996 at the age of 90.
✖