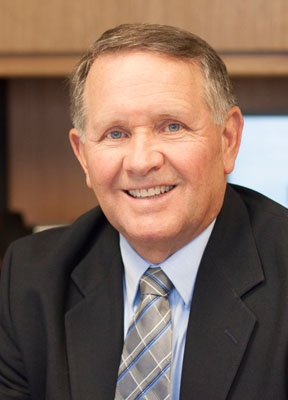 Stephen J. Daily was born in Howard County and grew up on the family farm. After serving the United States Army, with a tour in Vietnam, he enrolled at Indiana University Kokomo, earning a master’s degree in secondary education. From 1971 to 1979, he taught English and coached wrestling at Kokomo’s Haworth High School.

Steve was elected to the Kokomo Common Council in 1975 and in 1979, at age 32, became the youngest mayor in Kokomo’s history. Under his leadership, the city built a new city hall, a senior citizen center and public high-rise housing. His initiatives continue to benefit the community, including Leadership Kokomo, the Community Arts Council, a strategic planning process, and an economic development department.


In 1988, Daily became vice chancellor for external relations at IU Kokomo. He led campaigns that raised $4 million for a new library and student center, and he helped launch the award-winning Destination Education Program for disadvantaged students. He moved to Ivy Tech Community College in 1996, becoming chancellor for the six-county Kokomo Region in 2000. His efforts to make higher education more accessible led to an expansion from three facilities to eight and the addition of many new academic and technical programs. In Kokomo, his work paved the way for the current $43 million campus renovation.

Steve has served in leadership roles with the Labor Management Committee for the Grissom Air Force Base Realignment, the Region 5 WorkOne Consortium, and the Indiana Cities and Towns Foundation. He was president of the boards of St. Joseph (now St. Vincent Kokomo) Hospital and the Greater Kokomo Economic Development Alliance and was campaign chair for the United Way of Howard County.

Daily has been recognized as a Sagamore of the Wabash by the governor of Indiana, and received the Larry A. Conrad Civic Service Award from the Indiana Association of Cities and Towns. In 2013, the city hall constructed during his tenure as mayor was rededicated as the Stephen J. Daily Government Center.

Since retiring in 2015, Steve and partner Michelle Martin operate Thistle Rock Farm. His volunteer work includes the Kokomo Downtown Farmers Market, the Kokomo Symphony Orchestra, and the state board of Ivy Tech Foundation. In 2016-18, he chaired the campaign that raised more than $500,000 to replace the roof of the Seiberling Mansion.