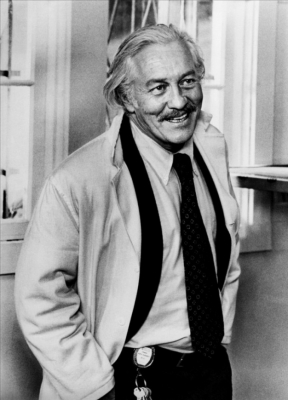 Strother Martin, who was born on March 26, 1919, in Kokomo, Indiana, was an actor who worked from the 1950s until just before his death in 1980.
Martin excelled at swimming and diving, earning the nickname of “T-Bone” Martin for his diving style. At the age of 17 he won the National Junior Springboard Diving Championship. He attended the University of Michigan as a diving team member and served in the U.S. Navy as a swimming instructor during World War II.
After the war he moved to Los Angeles, where he worked as a swimming instructor to Marion Davies and the children of Charles Chaplin. He found work as a swimming extra in water scenes for movies and quickly picked up small character roles throughout the 1950s. By the 1960s he was a familiar face in American movies.
He was best known for his role in the 1967 movie, Cool Hand Luke, in which he was the prison captain who uttered the infamous line, “What we’ve got here is ... failure to communicate.” He played villains in many of the best known Westerns in the 1960s and 1970s. His appearances include, The Wild Bunch, Butch Cassidy and the Sundance Kid, and True Grit. He also had roles on a variety of television shows including, I Love Lucy, The Rockford Files, and Gilligan’s Island.
One of his last acting jobs was on Saturday Night Live in 1980. He seemed at the peak of his career when, later that year, he died suddenly of a heart attack at the age of 61.
Verne Verona of Boca Raton, Florida, honored his friend Strother Martin as “a very strong paternal influence for me. I was ‘the son (he) never had’ he once joked with me. He lectured me about the industry, gave me jobs around his property to do and spent much time introducing me to classical music [and] improvisation.”
✖