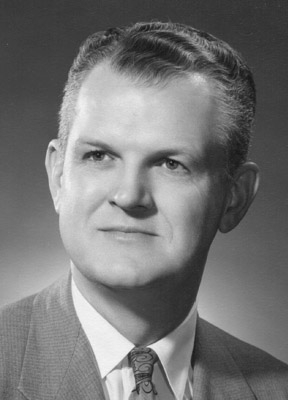 When the new science building on the campus of Indiana University Kokomo was dedicated in 2002, its title was an apt honor for its namesake’s decades-long commitment and contribution. “Virgil and Elizabeth Hunt Hall” was a fitting tribute to the man whose vision and leadership helped IU Kokomo grow from a handful of students crowded into an all-but-abandoned Victorian mansion to its modern 51-acre campus with more than 4,000 students.

Among the most distinguished academic leaders ever associated with Indiana University, Virgil Hunt was a visionary and influential educator. The “founding father” of IU Kokomo served as the first campus director from 1945-56, then moved to IU Indianapolis to become dean. In 1966, he was named the first registrar of the Indiana University Medical Center. He retired from that post in 1976, ending a 43-year career in higher education, and 33 years with Indiana University.


A native Hoosier, Hunt earned bachelor's and master's degrees in chemistry from Indiana University in the early 1930s. He taught chemistry and science at colleges in Arizona, Kentucky and Danville, Ind., and at Central Normal College in Danville from 1940-43 became the youngest college president in the United States at the age of 28. During World War II, Hunt served as a physics instructor for the Army and Navy.


Anticipating the need to provide higher education opportunities for GIs after the war, Indiana University adopted Kokomo Junior College as an IU extension center in 1945, and appointed Hunt as the center's first executive secretary (later director). Hunt helped to enroll a group of Jewish students who had been denied admission to other colleges, and later as director recruited the campus's first African-American student and one of IU's first African-American faculty members (fellow Hall of Legends member Dr. Herbert Miller).


Hunt was devoted to fundraising, campus expansion, donor support, and student recruitment. In addition to academics, the legacy of Hunt, his wife and their family is reflected in a number of awards and endowments. Among many honors he received were the Sagamore of the Wabash, the Jefferson Award, and the Central Indiana Older Hoosier of the Year for his civic involvement. He was a Congressional appointee to the White House Conference on Aging. He was 92 when died June 8, 2004.