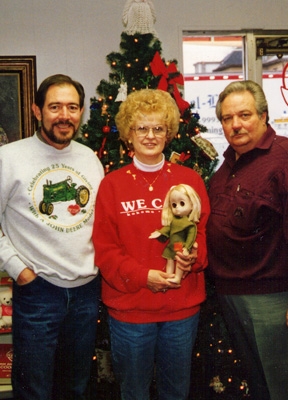 The story of We Care has near-legend status in Kokomo and Howard County, and the organization’s success has led to national recognition and imitation.


We Care began as a spontaneous, grass-roots response to economic hard times. The recession that began in 1973 was particularly difficult for industrial towns like Kokomo. Shortly before Christmas that year, a laid-off autoworker called a talk radio program on WWKI to talk about his situation, wondering how he could provide a happy Christmas for his family under the circumstances. One of the broadcasters, Dick Bronson, offered to donate half the money in his wallet if others in the radio audience would do likewise. By the end of the program, enough money had been donated to help the caller and several other families.

Under the leadership of Bronson, his radio co-host Charlie Cropper, and volunteer Jan Buechler, the We Care coordinator, the fund-raising effort was repeated in 1974 as a 6-hour telethon, and then expanded to a 47-hour auction the following year. We Care was given independent status as a 501(c)3 in 1983. The We Care Trim-A-Tree festival and tree auction were added, along with the We Care Store and a line of collectibles and food items. Hundreds of dedicated volunteers come together each year, with thousands of donors, to continue the tradition, organizing activities, managing donations, answering phones, working the store, and handling the details of a high-intensity marathon auction. Many other individuals and organizations held independent fundraisers, such as We Care Park, adding thousands of dollars to the annual total. Proceeds reached a peak of $857,500 in 2002, and the average in recent years has been $400,000-$450,000. The money is divided between five local social service organizations to support their Christmas programs.

In 1985, We Care received the first of three C-Flag volunteerism awards from President Ronald Reagan under his program of Presidential Citations for Private Sector Initiatives. Other awards followed, both for the organization and its founders.

Leadership of We Care has passed from the hands of Cropper, Buechler and Bronson to a core group of long-time volunteers. To this day, it remains dedicated to providing for needy children at Christmas.