History is about connections. In Howard County, our connections follow a trail of breadcrumbs from the economic explosion of the gas boom beginning in the 1880s all the way up to the present. Those boom years brought about the birth of the local glass industry, the beginnings of the auto industry, and the construction of the Seiberling Mansion. The county went from cornfield to industrial powerhouse so quickly that it took years for social structures - like healthcare - to catch up.

The Sisters of St. Joseph came to Kokomo from Tipton in 1912, intending to establish a hospital to care for the ill and injured of Howard County. At the time, the only local hospitalization available was in a doctor’s small private clinic. They began by canvassing the community door-to-door for donations to build a hospital. After the first day, they had collected exactly ten cents (Thecla, unknown).
The Sisters were known for their ability to cope with hardship, and their perseverance paid off. They purchased the old Bates homestead on East Vaile as a temporary home for the new Good Samaritan Hospital. The doors opened 100 years ago, on February 6, 1913 with 12 beds – and accepted the first surgery three days later. Conditions were difficult at best in the old building, and things were further complicated by the Great Flood of 1913. A levee across the street failed and flooded the surrounding neighborhoods. Bridges at Washington, Main and Union streets were submerged, and the Ohio Street bridge was destroyed. Lights, water, fuel and communications were out for days. The Sisters struggled on. 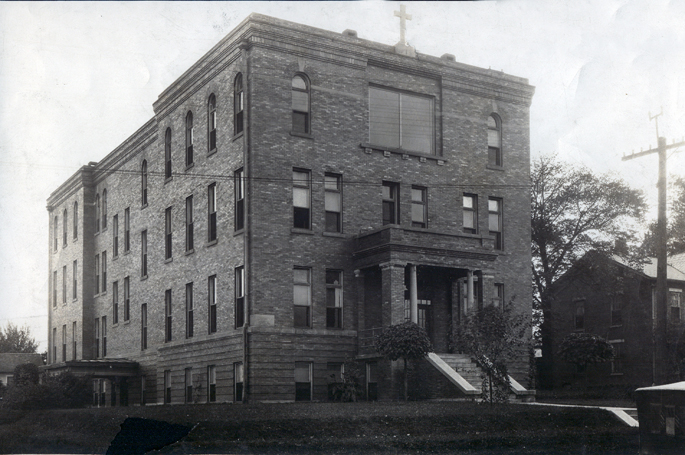 Almost as soon as the tiny temporary hospital opened, the need for a larger facility became apparent and a campaign to raise $50,000 began in earnest. By November of 1914, the new Good Samaritan Hospital at Vaile and Apperson was ready (photo). The three-story brick building was able to accommodate 60 patients. The first birth took place at daybreak on the day it was to open, followed that day by the first death and 12 surgeries. A 1916 hospital bulletin listed the price of a bed in the wards, including meals and nursing services, as $8 per week (Garst, 1980). It also advised patients that it was “forbidden to smoke in the wards, use matches, or spit on the floors, porches, or out the windows.”

As the population of Howard County continued to grow, so too did the need for medical services. The Sisters started a school of nursing in 1916 to help supply the hospital with sufficient skilled nurses to keep up with the demand. The school was accredited in time to graduate its first nurses in 1918 - the year of the great worldwide flu pandemic. It is estimated that 675,000 people died in America and 50 million worldwide. In Howard County, medical services were pushed past their limits, with the new hospital completely full and people dying in their beds at home.

The 1920s brought a different challenge to the hospital and the Sisters. The Ku Klux Klan was flourishing and spreading bigotry. Among its targets were Catholics and their institutions and hospitals. During the 1923 Konklave in Kokomo, more than 200,000 Klan members descended on Kokomo. The Klan targeted Good Samaritan Hospital for a demonstration. According to Mother Gerard:

The day passed, the night came, and the parade marched as scheduled down Union Street and on Vaile Avenue. All were dressed in the full regalia of the KKK. And as they neared the hospital, strangely enough, one of the leaders fell from his horse with an attack of appendicitis. He was rushed into the hospital, robes and all. The Sisters were in the operating room dressed for the surgery. As they uncovered the victim, Sister Louise said to him in a surprised voice: “John, what in the world are you doing in that robe, dressed like that!” They operated. He recovered and went out of the hospital one of the best friends the Sisters ever had. (Garst, 1980)

Generally, though, the Klansmen didn’t want to be treated at a hospital run by Catholic Sisters. They began promoting and fund-raising for the establishment of a second hospital. They reportedly collected more than $50,000.00, which they turned over to the Howard County Hospital Association for the purchase of a 17-acre farm on West Sycamore. Construction on the ‘County’ hospital began in 1924. Mother Gerard later told the story that,

“One Sunday afternoon early in 1924, some of the Sisters took a drive by the ground where the Howard County Hospital was going to be built. They drove up and stopped by the edge of the grounds on Sycamore Road. Sister Louise got out and buried a St. Joseph medal in the corner of that ground.” (Garst, 1980)

The 50-bed hospital (photo opened in 1925. Ultimately, it was a financial failure, and was forced to close in 1930. The building sat empty for five years, while Good Samaritan continued to grow and prosper under the Sisters of St. Joseph. 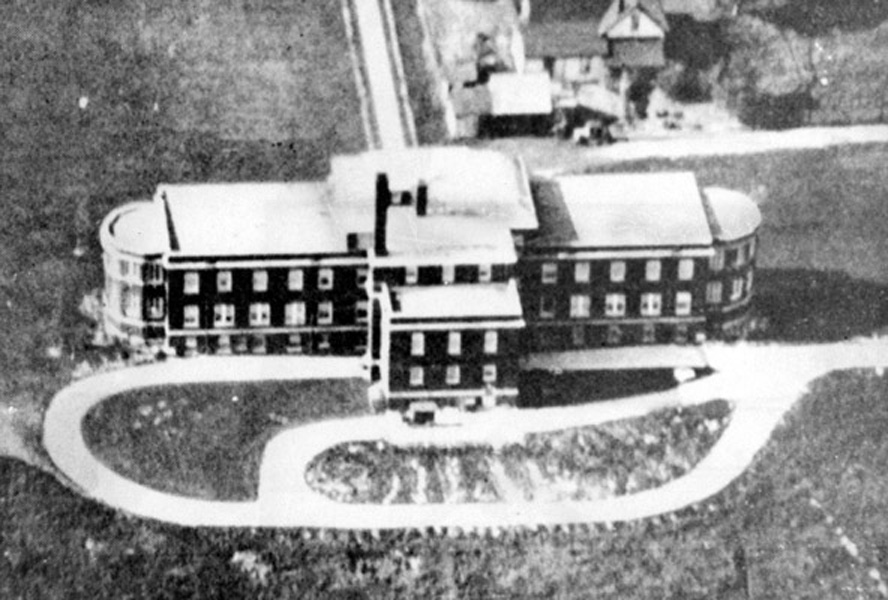 In 1935, three things happened that drastically changed the course of healthcare in the county. Good Samaritan Hospital was again challenged to keep pace with the needs of county residents. A long-time county resident passed away and left his entire estate to the hospital. And the abandoned Howard County Hospital was put up for auction.

Henry Fisse was the gentleman who bequeathed his entire estate to Good Samaritan. It’s been reported that he went to the Klan-supported HCHA hospital for treatment in 1930, when its financial troubles were peaking, and was turned away because he couldn’t (or wouldn’t) pay up front. He went instead to Good Samaritan where there was no discussion of payment during his one-month hospitalization. After his release, Fisse changed his will and left his estate to Good Samaritan instead of HCHA. His gift provided the resources for the Sisters’ successful bid of $20,000.00 for the building, land and equipment abandoned by the defunct Howard County Hospital Association. It was a major step forward toward the hospital we know today.

St. Joseph Memorial Hospital was dedicated in May of 1936 after renovation and modernization of the building. Three years later, a new west wing added 42 beds to St. Joseph, all medical services were consolidated there and the Good Samaritan building became a home for nurses. The nursing school moved to a new wing at St. Joseph , but was closed in the 1950s, and the Good Samaritan building was razed and replaced by Terrace Towers in 1970.

Beginning in 1941, Howard County mobilized for World War II. Kingston Products, Haynes Stellite, and GM were some of the local businesses heavily involved in war production. As part of the national security effort, St. Joseph Hospital was chosen to institute a training program for a Nurse Aide Corps. The Corps was intended to provide enough patient assistance that nurses could be released for the armed services. St. Joseph also became a National Defense Training Facility, providing additional wartime training for nurses.

After the wartime rationing ended, the hospital resumed its growth trend to meet the needs of the community - and construction picked up where it had left off. As a result, the St. Joseph building changed dramatically. Wings were added and removed (see photo). Entrances were changed. The number of beds grew dramatically, and facilities were modified for new technology. Telephones were installed in the patient rooms in the early 60s, and computers made their first appearance in the 1970s.

Today, you’d have a hard time finding physical traces of the original hospital. The Bates home and Good Samaritan building are long gone. The original Howard County Hospital building is gone, replaced by new wings and new buildings. The Sisters of St. Joseph transferred sponsorship of the hospital to the Daughters of Charity in 1994.

While the original bricks and mortar may be gone, vibrant connections remain. Their roots are deeply embedded in the history and people of Howard County.
Garst, S. D. (1980). Oral Accounts of the Sisters of Saint Joseph of Tipton, Indiana. unpublished.
Thecla, S. M. (unknown). History of the Sister's Congregation, Hospitals and Healthcare. unpublished.
✖