In the latter half of the 18th century, the man known as “Kokomo” was born to parents who were likely a Miami Indian and a Potawatomi Indian.

Researchers at the Myaamia Center at Miami University in Oxford, Ohio, have created a family history that provides valuable clues to the village or band leader Kokomo, a source of much speculation since the mid-19th century, and of special interest to residents of the town in Indiana named for him.

Working from the best available evidence, including the few known documented oral and written sources, as well as the 1873 Meshingomesia Testimonials, which established land ownership rights on the Meshingomesia reservation in Grant and Wabash counties after the forced removal of the Miami nation from Indiana, the Myaamia Center researchers are able to identify a person with a similar-sounding name in the area at that time.
The accompanying chart illustrates the “kinship” lines around this “Kokomo.” However, according to George Ironstrack, a citizen of the Miami Tribe of Oklahoma and the assistant director of the Education and Outreach Office at the Myaamia Center, it’s important to understand the concept of family within the tribe. “The best way to view a Myaamia person is through the lens of ‘kinship,’ which to the Myaamia includes close and extended kin,” he said.

For example, kinship can be translated as being either related to someone or allied with someone, Ironstrack noted, and striving to maintain a balance as an individual defines one as someone who acts properly and who is thus seen as a good relative. This would include immediate and extended family members, like aunts and uncles, helping with parenting duties, or caring for the elderly. Kinship then is central to the balance of a web of relationships and mutual respect, and literally directs one’s actions within the family or village unit.

In their paper “kokomo neehi eeweemaacihi” (A Brief History of Kokomo and his Family) Ironstrack and co-author John Bickers, a citizen of the Miami Tribe of Oklahoma and an incoming graduate student in the Department of History at the Ohio State University, have created a unique record that moves beyond the known (and often unsubstantiated) stories about “Chief Kokomo” to focus on his family. Though not entitled to an allotment as part of the Big Miami Reserve, Kokomo and his family were in fact related by intermarriage to the two large and influential Meshingomesia and Richardville families (Howard County, Indiana, was originally Richardville County, with Kokomo as the county seat).
Ironstrack notes that while Kokomo’s name and much of his life “remain a mystery to us today,” the family lived on for a time, and a direct descendant of Kokomo – Pimweeyotamwa (Eli Goodboy) -- served with the U.S. Army’s 101st Infantry Regiment in the Civil War. Sadly, as Ironstrack and Bickers write, no children of Pimweeyotamwa and his wife Tahkamwa survived infancy, so “no direct descendants of Kokomo exist among Myaamia people today.” But viewed through Myaamia kinship, descendants of Kokomo’s nephew, Thomas F. Richardville, as well as relatives among the Meshingomesia relatives through Tahkamwa (Mary Mongosa) “can be found living throughout Indiana and the broader American Midwest.”

(The Myaamia Center, formerly the Myaamia Project, was created in 2001. It is a tribal initiative located at Miami University in Oxford, Ohio, to advance the Miami Tribe of Oklahoma’s language and cultural revitalization efforts. More information is available here: http://myaamiacenter.org/miami-tribe-and-university/ ) 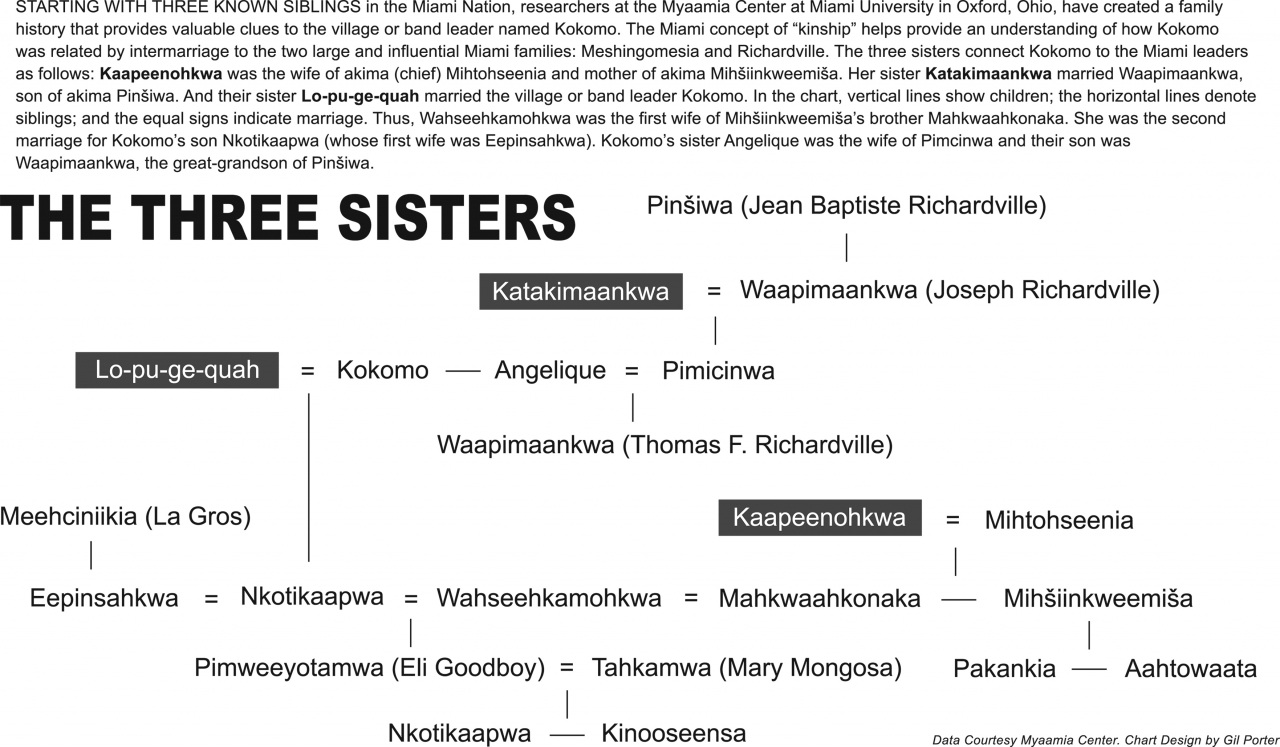