She Will Spend $50,000. In Giving Medical Treatment Absolutely Free to Suffering Women”, “A Million Women Bless Her Name”, Send No Money, Just Your Name and Address, If You Are A Sufferer From Any Woman’s Disease or Piles”, “Why Men Desert Their Wives”, “There Is Some One Near You Cured By Mrs. Miller”, “How to Cure Any Case of Piles”, “Put Your Faith In Mrs. Cora B. Miller”. “I Give Away Medicine to Women”, “A Wonderful Medical Discovery that Cures Women of Female Diseases and Piles as if by Magic, Sent FREE.” “Thousands Snatched Back from Certain Insanity by Mrs. Miller’s Home Treatment” , “I Cure Women of Female Diseases and Piles

Those are among several Headlines used across the nation as advertisement to sell a home remedy produced in Kokomo in 1909. Could this be the same Cora B. Miller who owned and occupied the Seiberling Mansion with her husband Franklin D. Miller, between 1905 and 1914?

The short answer is: “yes, but...” The long answer is very intriguing, indeed! According to a 1909 article in The Cleveland Plain Dealer, Mrs. Cora B. Miller:

learned a mild and simple preparation that cured herself and several friends of female weakness and piles. She was besieged by so many women needing treatment that she decided to furnish it to those who might call for it. She started with only a few dollars’ capital, and the remedy, possessing true and wonderful merit, producing many cures when doctors and other remedies failed, the demand grew so rapidly she was several times compelled to seek larger quarters. She now occupies one of the city’s largest office buildings, which she owns, and almost 1000 clerks and stenographers are required to assist in this great business.

JAMA, the prestigious Journal of the American Medical Association, in its July 23, 1910, publication, reported a completely different perspective:

Kokomo, Ind. has long been know to the readers of not-too-particular newspapers and magazines as the headquarters of a philanthropic lady who for some years has been ‘spending a fortune in giving medical treatment absolutely free to suffering women’--Mrs. Cora B. Miller. The scheme was to send a free treatment to all women applying for it, and to urge the prospective victim to take the regular treatment, price: $1.00. Form letters, “follow-up” letters and the other paraphernalia of the mail-order house were used in the usual way to relieve the gullible sick of their money. 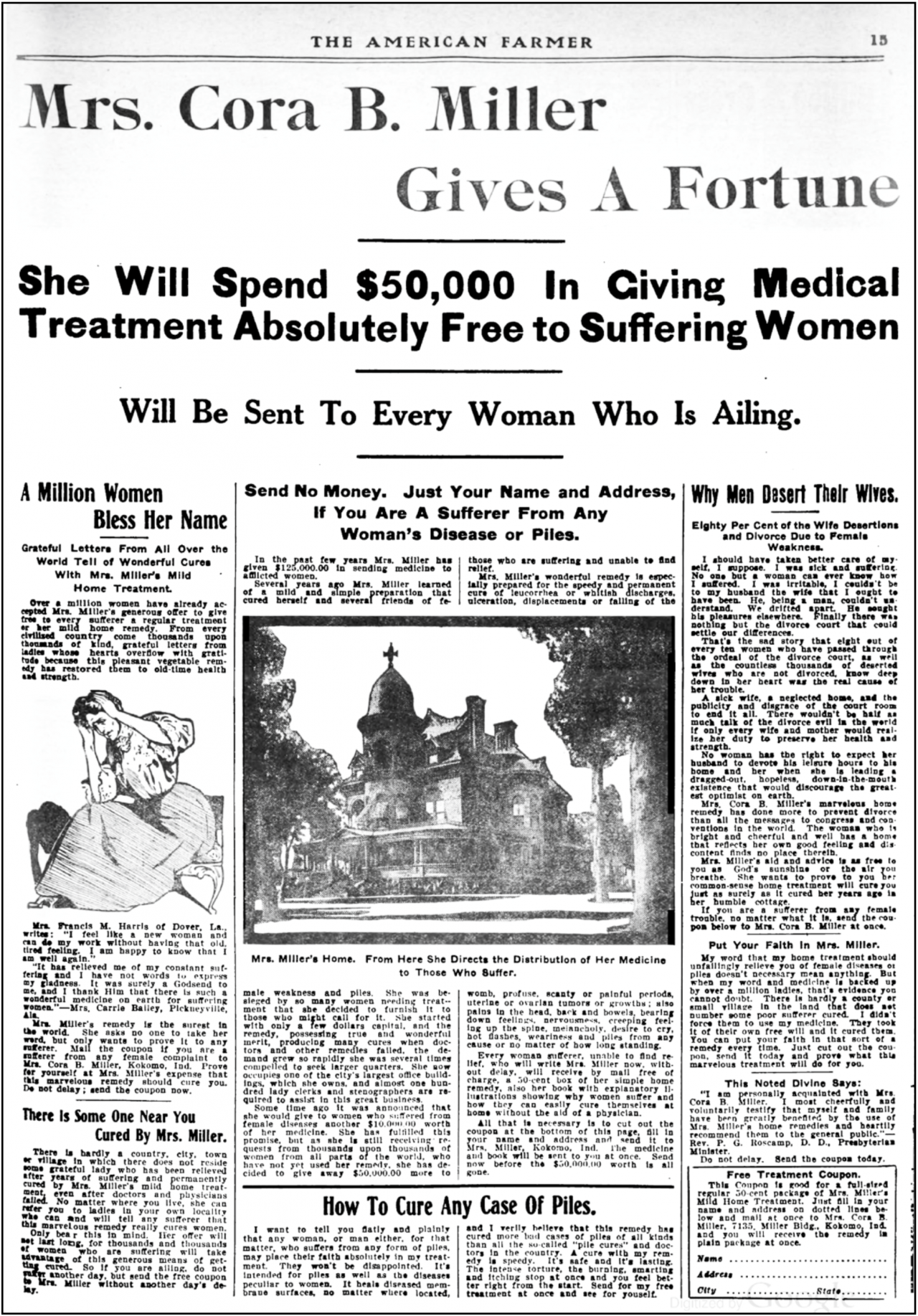 The JAMA article goes on to report the financial success of the scheme. Gross receipts of the business were in excess of $1000,000. per year. The postmaster of Kokomo testified that during the fiscal year ending June 30, 1909, over $81,000. was paid via money orders alone.

But was it Cora B. Miller doing business? The advertisements and circulars imply that Mrs. Cora B. Miller was in charge of the business, originated the “treatment” and directed the medical treatment of the people writing the business. The circular letters were signed “Mrs. Cora B. Miller” and every effort was made to convey the impression that a woman was running the business. In fact, the government showed that the business was conducted by Frank D. Miller, who started it under the name of the Kokomo Medicine Company and conducted it under this name until after his marriage, when it was reorganized and incorporated in his wife’s name. According to the report, Mrs. Miller had nothing whatever to do with the conduct of the business, had never had any training that would allow her to prescribe for women’s ailments and her name was evidently used only as an advertising gimmick much the same way as the Lydia Pinkham advertisements.

A chemical analysis, ordered by the attorney-general, of the product described as a suppository, consisted of
Testimonials? Of course. The assistant attorney-general summed this up in his report:

because of its antiseptic and astringent character, (the treatment) will undoubtedly palliate certain symptoms, and it is plain that the patients who have given these testimonials have been troubled only with conditions that the medicine will help...This is, in fact, one of the most pernicious characteristics of this business; the company is aided greatly in its efforts to foist this remedy on the public by these statement which are, no doubt, truthfully quoted, but which are the result of self-deception and known to be so by the promotors of the business.

In view of the evidence, the assistant attorney-general declared the concern to be “a scheme for obtaining money through the mails by means of false and fraudulent pretenses, representations and promises” and recommended that a fraud order be issued against the Mrs. Cora B Miller Company. The order was issued.
Franklin D Miller
b. 3-4-1866
d. 6-9-1946 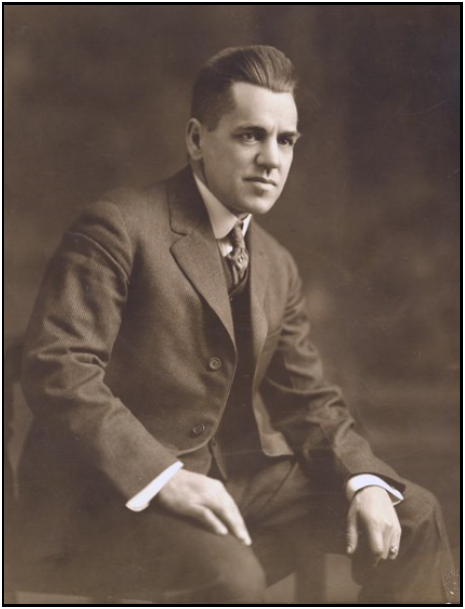