Howard County is justifiably proud of its history of invention – and its inventors. The names of Haynes, Spraker, Kingston and Maxwell are legendary, as are the alloys, automobiles, pneumatic tires, and carburetors they developed. But is a name missing from the list? Does one more name deserve a place on the list of “Firsts”? 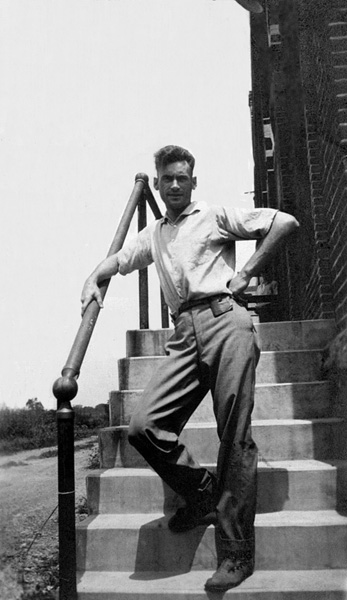 William Swern was born in Ohio in 1887 at the start of the gas boom. Rubber tires for those new-fangled automobiles brought him to Kokomo in January of 1919, where he went to work for D.C. Spraker’s Kokomo Rubber company. Within the year, he was a foreman, and he took the job seriously, always thinking about better ways to make tires.  (image: Bill Swern on the steps at Kokomo Rubber ca1925)

In the early 1920’s, demand was a serious problem in the tire business. Auto ownership was skyrocketing, but road construction lagged. More cars running on rough and undeveloped roads meant more flat or shredded tires. The tire business needed a change, and Bill Swern had some new ideas.

Before Swern, tire making was a slow, labor-intensive process. Tires were built one at a time, with the fabric and rubber laid up by hand. The materials and equipment were heavy, the workers exhausted, the plants filthy, and supply couldn’t keep up with demand. Bill experienced the physical demands firsthand, and watched what it did to his crews. As a foreman, he would have been responsible for the plant’s ability to keep up with demand.

In 1921, Swern figured out a way to break the manufacturing process into steps. Instead of each tire being built by one person, his system assigned different steps in the process to different crews - and then moved each tire from one group to the next until it was finished. Some say that was one of the first, if not the very first, assembly line operations in America. Henry Ford is officially credited with an earlier assembly line, but Swern’s was likely the first in a tire factory.

As he worked to improve his crew’s output and quality, Swern’s inventive mind came up with new devices to streamline the assembly line. He earned three patents for his inventions. The first was filed in 1923 for a “tire forming machine”. With it, he hoped to change the basic process and increase production rates. His machine replaced pneumatic, or inflated, forms with an expanding metal hub. The following year, he submitted a patent application for a “process of forming drum tires” and improved on the techniques and equipment he was developing with his first invention. In 1926, he filed for his third patent – for a “tire building drum” which was intended to improve the quality of the final product.

In the long run, Swern realized little personal benefit from his innovation. Others were better able to take advantage of them, including Goodyear Tire and Rubber. Swern left Kokomo Rubber in 1923 and started Swernbuild Systems of Kokomo in partnership with a man named George Morrow. The partnership was short-lived, ending when Morrow was caught using company money for personal purposes. Swern traveled the country selling his equipment, and had some mail-order success with sales to Canada, Australia and England. He didn’t take to the role of traveling salesman, though. In 1929, shortly before the economy crashed, he bought a farm in Parke County. The depression drastically changed his economic circumstances and nearly killed his dreams for the farm.

Goodyear Tire and Rubber approached Swern in the early 30’s about obtaining rights to one of his patents. According to family history, the company said it could reproduce his machine, but that it would be easier for all concerned if he would sell the rights. His lawyer advised him to sell for whatever he could get, saying there was no way to fight them in court. To keep his farm and family’s home, Swern chose to sell in 1933. Another of the patents was sold to Paul Frank of National Rubber Machinery in Akron, OH. In spite of those sales, though, the Swernbuild System was displayed at the 1933 Century of Progress World’s Fair in Chicago as the modern way to manufacture automotive tires.

Bill Swern spent the rest of his working life as a farmer. He passed away in 1983, a day short of his 96th birthday. He’s buried in Lafayette, where some of his descendants still live. Information for this article came from a family history, written by William Swern, Jr., and from US Patent Office records. 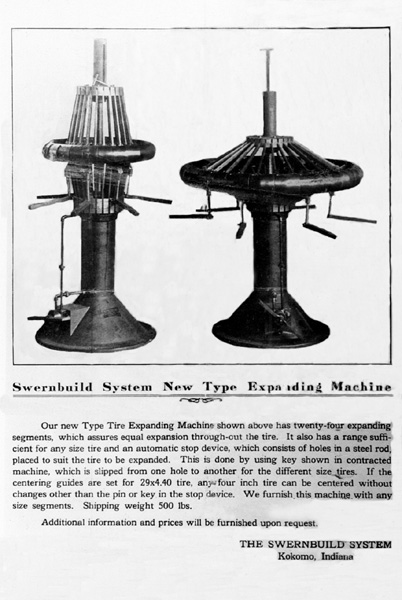